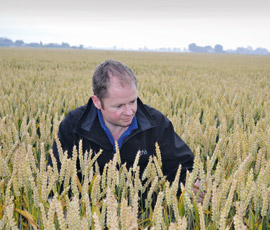 Britain’s top wheat grower is blessed with some of the country’s most fertile land, so experts say his main yield-limiting factor is sunlight on his Lincolnshire farm.

David Hoyles broke the British wheat yield record in 2011 on his deep silt soils and is making an attempt to top that this season.

His land sits some two metres below sea level. His soil consists of at least 18 metres of rich silt and it yielded a 14.3t/ha crop of wheat two years ago following a five year run of vegetables.

This season he has entered a yield competition run by crop consultants ADAS to try and better his 2011 output. He is convinced that the potential appears to be there.

This year’s crop has the theoretical potential to yield 20.8t/ha, according to ADAS. But in a low disease season and having had plenty of spring rain, it concludes the key factor holding back yield is the lack of sunlight and it was cloudy when Farmers Weekly visited last week.

Ironically, wheat is regarded as a break crop in amongst Mr Hoyles’ more profitable vegetable crops, but he does gain from the fertility following runs of beetroot and potatoes.

“Our two main benefits are soil type and vegetables, and on these soils we can pretty much grow what we want,” says Mr Hoyles.

He farms in a flat, intensive vegetable-growing area a few miles from the sea on the edge of The Wash, the square-mouthed bay and estuary where Lincolnshire meets Norfolk.

His deep silt soils were under the sea some 350 years ago before reclamation and close to the site where King John reputedly lost the Crown Jewels in 1216 crossing the marshy lands on the edge of the sea.

The family business is based at Monmouth House Farm in Lutton, some 12 miles east of Spalding.

His yield-topping success in 2011 came with the variety Invicta, drilled in late September, with a four-way split of nitrogen fertiliser and a three-spray fungicide programme.

The philosophy on the farm is to give the crop an early treatment of nitrogen in February and feed it steadily through the season with a careful eye on avoiding lodging on his fertile soils.

The level of inputs is generally low, with no phosphate or potash fertiliser used after vegetables. Minimum herbicides are applied as there is little blackgrass in among his spring-sown vegetable crops.

In fact, he is able to hand rogue blackgrass in his vegetable crops to avoid an expensive grassweed herbicide regime.

“There was no difference in crop management between 2011 and 2012, but there was nearly a 4t/ha yield difference,” he says.

In fact, he believes last year’s crop had the potential to beat 2011 up until the middle of June but over 250mm of rain fell in June and July, dashing hopes of a new record.

This year’s crop to challenge the yield record was chosen in April as a 10.3ha field of Santiago feed wheat which followed three years of vegetables.

Agronomy was similar to previous years with drilling in late September at a seed rate of 150kg/ha, with 180kg/ha of nitrogen applied in a four-way split and a full four-spray fungicide regime.

The crop established well but suffered in a cold and snowy winter and looked starved and not great in February and it was only by June the crop shed its “thin and needy” look.

There was no big disease risk this season although the damp sea mists can make it a blackspot for wet weather diseases such as septoria.

Mr Hoyles is able to spray his whole 150ha area of wheat in a day so can deal quickly with disease threats when they arise, and this allows him to keep fungicide costs relatively low.

His chosen field of Santiago was not treated with an expensive SDHI fungicide as a big disease threat never materialised, but SDHIs were used on other fields with more susceptible varieties and those showing lush growth.

“We use older chemistry with lower costs, and regarded the chosen field as low risk, so no SDHI was used,” he says.

His crops were still looking green below the ears last week in a late maturing and low disease year, and looked as is they would be ready for harvest in the third or fourth week of August.

Crop consultants ADAS launched its Yield Enhancement Network (YEN) earlier this year in an effort to break through the yield barrier facing growers.

It is hoped the competition will drive innovation and encourage growers to get close to their maxiumum potential yield.

Gold, silver and bronze prizes will be awarded for growers with the highest absolute yield and also the highest percentage of potential yield.

Similar gold, silver and bronze awards will be made for trial plots again both for the highest yield and the highest potential yield meaning that 12 prizes will be awarded at an autumn conference on 13 November.

More information can be found by accessing www.yen.adas.co.uk