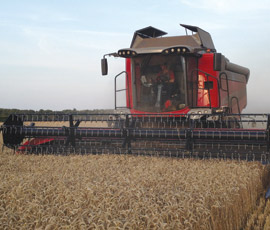 Farmers in Scotland are delighted to have been combining cereals at the lowest moisture contents in years, and harvest is progressing well.

In Laurencekirk, Angus, Andrew Moir had finished combining about 10 days earlier than normal. “The peculiarity was, and this is a first in my farming career, we finished wheat and oilseed rape on the same day,” he said.

“Spring barley in our area has been swept up, and a good week will see most of the lowland areas finished,” said Mr Moir. He was now taking the opportunity to get a lot of remedial work done to the land, in preparation for wheat and barley drilling.

“Yields have not been astounding, but specific weights have been generally quite good. Nitrogen contents in the spring barley have been on the high side, but this has not been universal; we’re just glad to get it all swept up and prepare for the next one.”

In Easter Ross, the only problem Jim Whiteford had encountered was land being too dry for potato lifting, resulting in some crop damage. Cereal harvest was complete, with 283ha cut in 14 days, he said.

“It’s been cheap and cheerful; quality is excellent, and yields are above average. Oilseed rape is sown and through the ground, and we’re now ploughing for winter barley. It’s so good to have great weather; there’s a long way to go with wheat to sow.”

Harvest was progressing well in Perthshire, but Ian Sands had given up cutting barley for now, as it wasn’t quite ready. “Instead, I’ve been cutting wheat at 15% moisture, which is unbelievable.”

In Stirlingshire, most people had finished harvest, said David Bryce, and yields had been good. “Barley averaged 6.2t/ha, with spring oats at over 7.4t/ha,” he said. “We’ve still got some straw to bale in the area.”

“We’re cracking on sowing next year’s crop and very pleased with ground conditions; what a difference a year makes.” Having just started burning down potatoes, he hoped the weather conditions would be favourable in October for lifting. “We’re very keen to have normal potato lift and keep the soil in the field not in the tattie box.”

On the Black Isle, David Houghton had had an easy harvest so far, but still had 20-25% left to do. “Quality and yields are perfectly acceptable, though nitrogen levels in some malting barley are a bit higher than normal,” he said.

Simon Barry, chief executive of Highland Grain, reckoned harvest was 85–90% complete in the inner Moray Firth, Black Isle and Easter Ross. “Spring barley yields are probably better than predicted, although not for those on very light land which suffered in the dry July weather,” he said.

Malting barley quality was very good, but perhaps 5-10% was failing due to high nitrogen, mainly off the light land, he added.

Although autumn sowings were well underway, many farmers were holding off drilling wheat due to lack of moisture, he added. “However, I can’t imagine that it will be too long before there is sufficient moisture to proceed.”