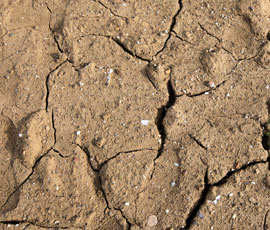 The wettest April on record and continuing rain in May have reduced the risks of restrictions on spray irrigation for farmers this summer, according to the Environment Agency.

But the agency warned that underground water levels were still “low” or “exceptionally low” in some areas, and some rivers were still at risk of drying up as groundwater levels reduced over the summer with use.

It stressed that it is still important that everyone continued to use water wisely, to protect water supplies for agriculture and the environment.

“We have seen a huge improvement in water resources in just a few short months, putting us in a much more positive position for the summer,” said Trevor Bishop, head of water resources at the Environment Agency.

“While the downpours in April were pretty miserable, they were really welcome, as water companies were able to refill their reservoirs, river levels are mostly back to normal and many wildlife habitats that were suffering have recovered.”

In its latest Water Resources and Drought Prospects report, the Environment Agency found river levels and reservoir stocks had significantly improved, easing the pressure on the environment and water supplies.

Further water restrictions for the public, farmers and businesses were now increasingly unlikely, it said.

But with groundwater levels still low in some areas and unlikely to improve before winter, the Environment Agency and water companies were putting plans in place to protect water supplies next year if another dry winter further reduced these underground stocks.

“While the risk of drought with further water restrictions and associated environmental impacts this summer has reduced, the situation could deteriorate again next year if there is not enough rain this winter,” added Mr Bishop.

“We are still working with partners, planning for the impact a third dry winter could have on next year’s water supplies.”