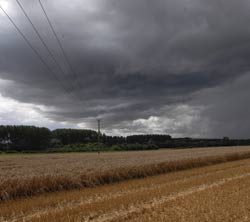 “We had 17mm in 24 hours, and there’s a poor forecast until Thursday to Friday,” he said on Tuesday (28 July). “Still, we’ve been making progress, and nothing’s hurting yet.”

His main concern was a growing workload.

“I feel it’s all going to come at once. There’ll be pressure to get the thatching straw in the barn and to keep the combine wheels turning.

“We’ve got the machinery, storage and staff, but presently not the weather. It’ll be busy when we do get going again.”

Initial yields, from August-sown rape off chalkland, have been good. By Saturday he had cut Castille at 12-13.5% moisture at an estimated 4t/ha, plus Epure at 9-10% producing a “very pleasing 4.5t/ha” or thereabouts.

“My yield assessments are based on corrected combine yield meter reading and store capacity.” Rabbit grazing leading to slower growth meant 4ha of Castille in one field had to be left, as it was too green.

“We’ve also cut all our 13ha of Maris Widgeon thatching straw wheat producing about 24,000 sheaves. That’s a bit down on normal, probably because it didn’t tiller quite as well as usual, but the quality’s OK. We had them all stooked up, but a few need re-stooking.

“That leaves about 3ha of triticale once it’s fit.”

Before the weather broke he checked his 70ha of Tipple spring barley. “Rubbed out by hand it was 19% and well necked over. So that won’t be too far away, and it could come before the rest of the rape.”

The latter, Flash and Excalibur later-sown on heavier land, was far from fit having been sprayed off only eight days earlier. “But our wheat’s also turning fast.”

Until stopped by Monday’s rain Andy Barr’s combine had cut about half his 140ha of winter oilseed rape in Kent.

“It looks very encouraging despite the odd rabbit- and pigeon-grazed patches. It may get over our 4t/ha target, but it’s early days and I’ve no weights yet.

“It’s certainly ready and heavy thunderstorms will not be welcome.

“At this stage the new variety Dimension seems to have out-performed Castille and Excalibur. Moistures have ranged from 8-14%.”

As expected, Cassata winter barley grown for malting, was his lowest yielding for several years.

“Fortunately, we didn’t have too much, just 30ha.”

It was sown in response to high nitrogen fertiliser prices and to try to use Weald Granary and Openfield’s expertise in making the most of quality crops, he said.

“More importantly it was all on very sandy soil, and until recently we’ve been woefully short of rain. It was telling that after 18mm of rain last Friday the soil was still bone dry.

“Still, the quality is apparently good so we’ll hope for some miraculous malting shortage to drag the margin up.”

In the absence of yield weights from Weald he anticipated only 7t/ha (2.8t/acre). “Normally, we do around 8.5t/ha in that situation.”

The rain-induced break was being used to fit a Terracast seeder to the farm’s subsoiler to experiment with band sowing rape. “We’ve also rigged up an old ATV sprayer to apply fertiliser in bands at the same time.”