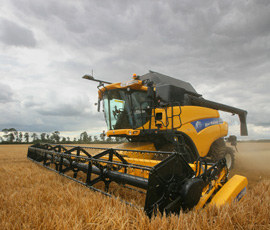 “We’ve got a drill out near Avonmouth this morning (16 August) and it’s dry there – but it’s pouring here,” said the partner at Alvis contracting.

“Most of the rapeseed will be ready to cut when the weather dries up – although there’s one bit on the top of the Mendips that hasn’t been desiccated yet.”

Prior to the rapeseed, Mr Harding had cut 38ha of winter barley and 240ha of spring barley, which all yielded around the 7.4t/ha mark.

“I was hoping for a bit more than that off the winter barley, but it was just saturated over the winter.”

As a result, he had had to sow much more spring barley than usual, with maize drilled on the arable unit too.

“It’s really messed up our cropping plans – our rotations are completely out of sync and will take a good two years to get back again.”

Although Mr Harding hadn’t redrilled any rape, he had ripped up 40ha of spring barley which was capped over after heavy rain.

“The crops aren’t suffering in the rain at the moment, but harvest just isn’t going to be very excited,” he said. “And we didn’t sell much forward so are faced with some pretty poor prices as well.”