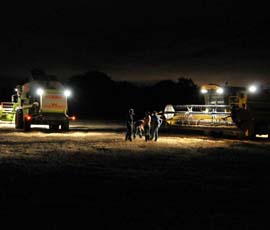 “Considering the growing season we’ve had, it’s been a very pleasing year,” he said.

Saffron winter barley yielded an average of 5.6t/ha, coming off the field at around 15% moisture.

“We’re slightly disappointed as we would usually hope to reach targets of around 6.2t/ha,” said Mr Phillips.

“However, following a waterlogged autumn and a frozen spring, we thought at one point we wouldn’t be getting the combine out at all.”

Although quality was good, straw yield was also down on previous years, at 3.7t/ha. “However, we would rather have 3.7t/ha of good straw, rather than 4.9t/ha of rubbish,” he added.

Tipple spring barley was very pleasing, averaging 7.4t/ha and coming off at 16% moisture.
“We drilled the barley on 9 April. It’s the earliest we’ve ever put the crop in, but we’ve never looked back.”

The sample was nice and clean, with the straw coming out think behind the combine.

Although the Diego winter wheat and winter oats were still not quite ready to go, Mr Phillips was pleased with progress, and on track with plans.

“The wheat’s like a patchwork quilt at the minute so we’ll wait until it’s all ready before we make a start,” he said. “There wasn’t a crop in sight in April, but the fine weather saw it turn a corner and it didn’t stop improving from then on.

“If we get to 6t/ha, we’ll be happy. Nothing’s looking that poor in the area and the main thing is that we’re still farming.”