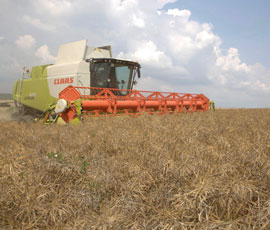 “We cut 16ha of Excalibur and it averaged 4.2t/ha, dry over a weighbridge,” he said.

“We drilled it early in September with a power harrow drill – quite a lot of rapeseed in the area went in with a subsoiler drill and it was a complete disaster.”

Mr Sant had also cut 32ha of Cassia winter barley, which didn’t do too badly at 6.7t/ha. “It’s a nice bold sample.”

However, nothing else was ready to combine, with oilseed rape maturity proving extremely variable, he added.

“Some hasn’t even been desiccated yet, so that will be at least three weeks away.”

Winter wheat looked well, and would be ready at the end of next week, but the spring barley was still a while off, said Mr Sant.

“People are just starting to really get into harvest in the area – most of the winter barley is done, and the wheat isn’t ready.

“There’s also a lot of rain forecast this afternoon, so there won’t be much cut today.”