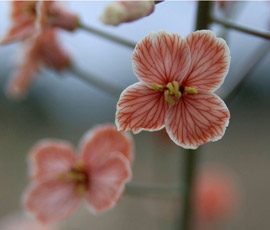 The dazzling yellow fields of oilseed rape flowers in spring have become a familiar sight in our countryside, but this could soon change to a carpet of red.

This is because scientists at Rothamsted Research have found that changing the petal colour of oilseed rape from yellow to red can repel pollen beetles.

For the study, published in the journal Arthropod-Plant Interactions, researchers used food colouring to dye the flowers of a white-petalled oilseed rape variety.

In the laboratory and in field trials over two years, they assessed the attractiveness of the plants to the pollen beetles by measuring the number of beetles found on plants of the different colours – white (control), yellow, red and blue.

Yellow and white were most attractive, while red was least attractive to the pollen beetles.

Scientists also tested for the effect of odour and found there was no significant difference between treatments, which confirmed that the beetle preferences were due to changes in petal colour.

“This is an exciting and intriguing finding,” said lead author Sam Cook. “Significantly more beetles were found in the white plants and plants dyed yellow than on the plants dyed blue or red.”

Dr Cook added: “This was the case both in controlled environmental conditions and in experiments conducted in the field over two consecutive years.”

The researchers also found that pollen beetle were attracted to objects that show high reflectance of ultraviolet light (UV) such as white and yellow colours.

By planting yellow OSR varieties around field edges and red plants in the middle, pests could be attracted away from the main oil producing crop, using a “push-pull” crop trap strategy, said Dr Cook.

“These findings are important as they can be used to help us develop highly attractive traps or less attractive crop varieties for improved pollen beetle control,” she added.

Rothamsted scientists believe they could breed red-coloured rape plants using the anthocynanin gene, which is responsible for red and purple colouration and is present in oilseed rape.

Pollen beetle is a major pest of the flowering stage of the plant and threatens the sustainability of the crop due to the spread of populations resistant to insecticides.

Oilseed rape is currently the most important source of plant-derived oil grown in Europe. In the UK alone, winter oilseed rape is the second largest arable crop, worth an estimated £400m a year at farmgate prices.