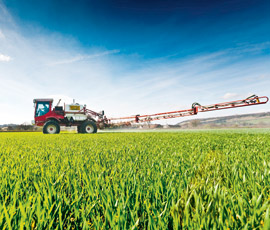 With winter wheat crops a real mixed bag, disease management will be tricky. Adam Clarke asks agronomists around the regions for their assessment of disease risk and advice on how to counter the threat in the current season

Crops are split into two groups in Herefordshire for independent agronomist David Lines – those drilled in September and those from October onwards.

Later-drilled crops are “dire”, he says, with plants carrying no more than two or three leaves, despite receiving nitrogen in recent weeks.

The healthier early-drilled crops are looking more promising, but septoria is easy to find and he is concerned over eyespot.

“I’ve seen some fields with 30-40% of tillers showing symptoms of the disease, which can be blamed on the wet conditions and the high levels of inoculum carried over from last year,” says Mr Lines.

Mr Lines will be applying a T0 to these forward crops with 1-1.5 litres/ha of Bravo, but he may opt for Cherokee in rust-prone varieties.

If the weather doesn’t allow a timely T0 spray, a more robust T1 application will be vital.

“We need a more curative approach to wipe out the disease with the best products, which are the new-generation SDHIs Adexar and Aviator,” he says.

Where additional eyespot isn’t a concern, Adexar will be Mr Lines’ choice at 1.25 litres/ha for more curative activity.

However, where additional eyespot activity is required, 1 litre/ha of Aviator will be preferable, as the SDHIs triazole partner, prothioconazole, has better activity on the stem-based disease.

“The pricing of the two best SDHI formulations is closer this year, so it is about using each one to their strengths,” notes Mr Lines.

Where a disease-holding T0 spray has achieved its aim, a Tracker- or Proline-based T1 will be used depending on diseases present.

Mr Lines always opts for the addition of a strobilurin into the T1 mix. “It’s usually in the form of the product, Amistar Opti, due to its physiological greening benefits,” explains Mr Lines. 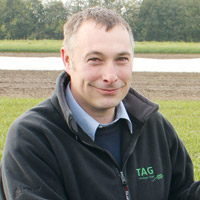 Disease risk is the least of his worries, says Julian Thirsk, who is an independent crop consultant with The Arable Group.

The relentless easterly winds during the recent cold spell have robbed some his early-sown wheats of up to 50% of their green area.

“We only managed to get around 10-15% of our planned winter wheat area in during the autumn, most of which is well tillered, but you struggle to find green leaf,” explains Mr Thirsk.

He points out the recent cold and dry spell has been a double-edged sword, with good progress made with spring drilling.

“However, it has really set the crops back and with the soil temperatures around 2-4C, I can’t see them going anywhere for a week or two,” says Mr Thirsk.

With the sorry state of many crops, Mr Thirsk will be judging his T0 applications on a field-by-field basis, with disease levels generally low.

Although septoria can be found on lower leaves, plant densities are low and so this will not aid disease levels.

His September-drilled wheats will receive Bravo or Cherokee if necessary, but later drilled crops won’t justify a treatment.

On T1 sprays, Mr Thirsk notes the difficulty in trying to plan as the situation can change so dramatically.

“If it becomes wet again eyespot could be a problem, so most of my T1s will be based around Proline with the addition of Bravo. Proline has the edge on stem-based diseases,” explains Mr Thirsk.

Mr Thirsk believes SDHI fungicides will not pay at T1 this year, unless the situation changes in dramatic fashion.

“Unless septoria romps away like last year there won’t be any need for the investment,” he adds. 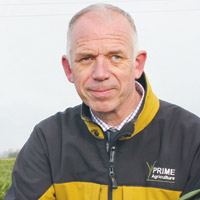 In East Anglia, Prime Agriculture agronomist Peter Riley is cautious about being too optimistic for fear of hate mail from his northern and western counterparts.

Much of Mr Riley’s planned winter wheat area was drilled in good conditions throughout September before the weather deteriorated in October.

“The early sown wheat is around growth stage 30, but we have some later-drilled wheat established after root crops that is anything from one leaf to growth stage 22,” notes Mr Riley.

He has seen crops deteriorate in the wake of the cold blast, but also the septoria, which could be found easily in the base of September-drilled wheat.

“The wind has reduced the activity of the disease. Despite this I am still loath to leave crops unprotected until T1,” he points out.

“We are able to reduce the amount of material we are using at T0, though, which will save between £4-8/ha.”

Mr Riley will be applying a T0 of Cherokee or Crafter, unless a herbicide is being added to the tank, in which case a triazole will be used.

This is an issue when using chorothalonil with certain herbicides, which can compromise efficacy and crop safety.

A wait-and-see approach is being taken with the T1 timing, and if the dry and cool conditions continue disease may not be a big problem in his area.

“At this stage we will be basing our T1s on a robust rate of triazole and a strobilurin will be something we will use more than previous years, particularly in stressed crops,” explains Mr Riley.

The strobilurin will add to the activity on yellow rust and have a physiological “greening” effect that some crops will need.

He believes Proline will be the predominate triazole, with its perceived strength on mildew, which tends to be a problem on later-sown wheat.

However, epoxiconazole will also come in to consideration at T1 if rust becomes a problem, particularly on susceptible varieties.

The possible inclusion of an SDHI is something Mr Riley is not considering at this stage, except in the “dirty” wheat varieties.

“However, we have to be mindful of last year, when there was a disease explosion, so we need to be flexible to a degree,” he adds. 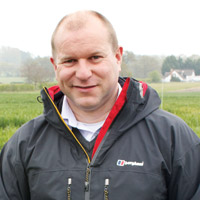 In the south of England Richard Cromie, independent agronomist with Crop Management Partners, can’t believe what a difference a year has made.

Last season brought some of the highest disease pressure that many had seen, however, Mr Cromie has not noticed much disease in crops this spring.

Septoria is easy to find in the base of more forward wheats, but there is no mildew, rust or stem-based disease present to cause alarm.

“I don’t see much need for a T0 at the moment across most crops, whereas last year about 90% of my winter wheat received one. This year I think it will be closer to 15%,” he says.

His most forward wheats, where septoria can be found, will get a T0 of Bravo plus a plant growth regulator, but Mr Cromie will be looking to finish herbicide sprays, rather than apply a T0.

With disease levels relatively low, Mr Cromie is planning to use a predominantly triazole-based T1 using Proline or Tracker.

“I see more Proline being applied this year, with its strength on mildew and stem-based disease being a key part of that decision.

“A specific mildewicide such as Talius or Fielder can be added if mildew does really kick off and I will add the multi-site fungicide – chlorothalonil – as a matter of course,” he says.

If rust comes to prominence he would recommend the addition of a strobilurin and advises growers to keep an eye out for yellow rust, with many susceptible varieties grown across his area.