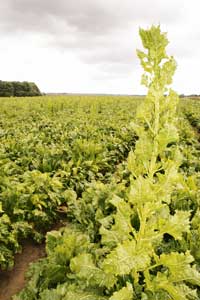 As the new sugar beet season gets under way, growers will have access to more precise information on the risk of bolting. Sarah Henly investigates

If you were growing sugar beet in fields prone to frost in 2008, chances are you had bolters. Even the best bolting resistant varieties sown before mid-March were typically affected by that particularly cold spring weather.

The unlucky ones who still have weed beet emerging may think twice about sowing sugar beet early this season. But with yield advantages that could easily cover the cost of hand rogueing if that became necessary, it is well worth considering, suggests Robin Limb of British Sugar.

“Our recent work has given us confidence that sowing as early as the first week of March to take advantage of a longer growing season may pay on less frost prone sites. However, I would recommend going in the second week to limit the bolting risk. The main thing is to get the seed-bed fine and firm and choose a suitable variety.”

Sowing later this month (February) is an option, but even using the most resistant type could be a risk too great, particularly on the colder Fen peats and Lincolnshire Wolds, he warns.

“In the absence of accurate long-term temperature forecasting, we must rely on a computer model we’ve recently updated to better quantify vernalisation – the intensity of cold that plants need to experience in the first three months after drilling for them to flower. This model, linked with varietal susceptibility, gives us a pretty good measure of bolting potential.”

Most varieties need to experience around 140 hours of cold temperature between 0-14C, before they produce significant numbers of bolters. Each extra hour above that 140 threshold causes an increasing proportion of the plants to bolt, explains Mr Limb.

In bolting-resistant varieties – for example, Opta, Saracen, Sentinel and Trinita – each extra hour produces about 400 bolters/ha, whereas it can be five times that in bolting susceptible varieties. The latter include Carissima, Pernilla and Fiorenza, which offer rhizomania or cyst-nematode resistance.

The project, funded by BBRO and carried out by British Sugar, has more accurately ranked the bolting sensitivity of all current varieties; these rankings are in essentially the same order as on the BBRO/NIAB Recommended List. Using this information, growers will be able to have about six weeks notice of the need for removal before bolters appear in the field.

It is hoped that the model will be up and running online by next month. British Sugar’s area managers will download local real time temperatures to a central database and calculate the risk of bolting for a given situation.

Where on-farm temperature data can be inputted, the model could be used to predict the risk for a particular variety sown on a specific date in an individual field, explains Mr Limb.

He recommends choosing bolting resistant types for early sowing unless there’s a greater case for needing a rhizomania or cyst-nematode resistant variety. Treat with caution any that on average produce a large number of bolters/ha when drilled in mid-March, he urges.

“If you have ordered seed of a variety with poor bolting resistance, don’t rush it in. Removing bolters may cost as much as the extra 5-10% yield you stand to achieve because hand rogueing may not be practical. Remember 2008? Cutting or wiping can cost as much as £50/ha,” he warns.

• Bolting severe in two years out of last 10

• Number of bolters depends on temperature