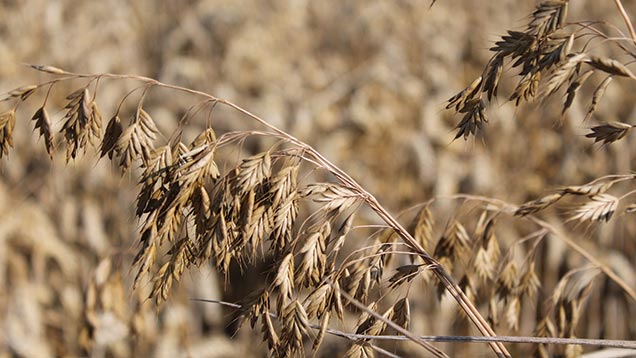 Keeping a firm control of the various brome types this autumn could make the difference between break-even and profit for many growers, with even 3 plants/sq m in winter wheat robbing up to 2.4% of yields.

With cereal prices at about £130/t, few can afford such losses, says one agronomist.

The adoption of shallow, non-inversion tillage and earlier drilling has led to a big increase in brome presence on UK farms over the years.

Independent agronomist Patrick Stephenson says min-till growers in northern parts of the UK are most vulnerable to the risk of a brome infestation.

“Brome thrives in min-till situations. Further north above the Humber and into Scotland, it still won’t be quite as bad a problem as blackgrass, but it can be significant.”

“If you are using a ‘scratch and drill’ type system you can end up with a serious brome infestation if you’re not careful.”

Mr Stephenson adds that stony land is where brome tends to survive because it can be difficult to bury the seed or create an effective stale seed-bed.

Aside from incurring a yield penalty due to strong weed competition, neglecting a brome invasion can also cause crop lodging and deliver a double knock to profits.

Mr Stephenson explains the key to successful brome control lies in knowing exactly what you’re up against, but correctly identifying the five main types of brome found on UK farm land can be tricky.

Firstly they can be split into two groups. The anisantha species includes great and sterile bromes which have long awns and loose, floppy heads. Meadow, soft and rye brome form the bromus species and have short awns and tighter flowering heads.

“Sterile and great bromes are very difficult to tell apart, but they are visually very different to soft, meadow and rye brome,” adds Mr Stepheson.

“It’s much easier to distinguish between the bromus types. These are more upright and the ear is more like a cluster of seed going up the side.”

Another tip to help tell the two species apart is to walk the fields and determine if the weed has established as an even spread across the land or in patches.

“Meadow, rye and soft brome seeds will stick in the combine’s sieves and get dispersed across a field, whereas great and sterile brome seeds are heavier and tend to fall straight out of the combine, which is why you find these types in clumps.”

Once you know what you’re up against it is likely that there will be more than just one type of brome that needs tackling. Mr Stephenson warns that this presents growers with a dilemma as it is not possible to control all brome species at once.

“The problem is that you deal with the various bromes in conflicting ways, so the best thing to do is identify which type is causing the greatest problem and go after that. It’s not really possible to effectively go after all types in one hit.”

He notes that in all cases, treatment of brome is easiest before crop emergence, making the time between harvest and autumn drilling the optimum window of opportunity.

According to Mr Stephenson, the prime form of attack when dealing with sterile and great brome is a stale seed-bed.

He recommends shallow cultivation to bury seeds as soon as possible after harvest to encourage maximum germination, following up with a glyphosate spray once a good flush of the weed has established.

“Glyphosate will kill all brome species. You need to break the natural dormancy of the seed, something that is easier with great and sterile brome, but more difficult with the others.

“A stale seed-bed will induce dormancy of bromus species so it is better to leave the seed on the surface and then go after it in a month’s time.”

It is also important to remember that any straw moved may contain substantial quantities of viable seed, hampering attempts to control the spread of brome populations.

How to control different brome types

Mr Stephenson explains that once the crop has emerged there is a limited number options left for growers looking to control their brome.

Post-emergence chemical controls are only available for use on winter wheat crops so he says it makes sense to avoid growing other crops in badly affected fields.

“You need a full pre-emergence programme based on a 240g dose of flufenacet. Then you need something like prosulfocarb to get actives with different modes of action to give better control and stave off any resistance.”

All post-emergence chemicals are ALS inhibitors and can only be applied once in any programme.