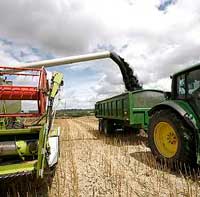 As milling wheat crops come into ear, there’s everything to play for. What a relief it would be to know that cool weather during grain filling and rain at ripening shouldn’t ruin your chances of securing a breadmaking premium.

That may not be a pipe dream where Hagberg Falling Number is concerned, says Peter Kettlewell of Harper Adams University College. He is co-ordinating the HGCA-funded part of a near-completed LINK project helping plant breeders select varieties less likely to come unstuck in poor summers.

Low HFN leads to complications in large-scale baking operations, and many bakers insist on this measure of starch integrity being at least 250 seconds. Just a few undesirable grains in a load can cause downgrading, he warns.

Last season, of the nabim group 1 wheats on the market, more than a quarter failed to reach the minimum HFN required for breadmaking when other specifications – 13% protein and 76kg/hl specific weight – had been met. In 2008, the level was even higher.

Tackling the problem before varieties are released on to the market is a cost-effective and sustainable solution. It will ultimately save growers money and increase market potential, explains Prof Kettlewell.

Scientists have identified two independent phenomena – pre-harvest sprouting (PHS) and pre-maturity alpha-amylase (PMA) – that account for unstable HFN. The core of the project was to find ways to spot and select against the forms of these characteristics that threaten quality.

“The potential vulnerability of breeding lines to weather-induced problems such as sprouting is often not known until the late stages of variety testing. By then, plant breeders may have unwittingly given space to lines with genetic traits favouring sprouting and high alpha-amylase. Having the know-how and tools to filter out undesirable genes early on will minimise bad investments and save considerable time.”

The project team has identified genetic markers for PHS and PMA, which can occur together in the same variety. Rather than wait several generations to multiply enough plants to get 300g of milled grain for HFN tests, breeders can just use the DNA markers to weed out no-goers, he explains.

“By subjecting breeding material to irrigation regimes under field and glasshouse conditions, we can identify lines prone to sprouting. Similarly, under air conditioning, we can pick out lines producing amylase in cool temperatures around milky ripe. Field trials over four seasons have confirmed these findings.”

Confident in the results, the plant breeders involved in the project have already eliminated some low HFN lines. Prof Kettlewell sees the industry collaboration as invaluable.

“Many companies have invested time and money, and levy-payers have contributed £160,000 in cash and £11,000 in kind. With the potential to make milling premiums more achievable, the project has been excellent value for growers. It should sustain farm profits, reduce the UK milling industry’s dependence on imported grain and enhance the competitiveness of home-grown wheat in overseas markets,” he hopes.

• Need to identify genetic control of alpha-amylase production in grain