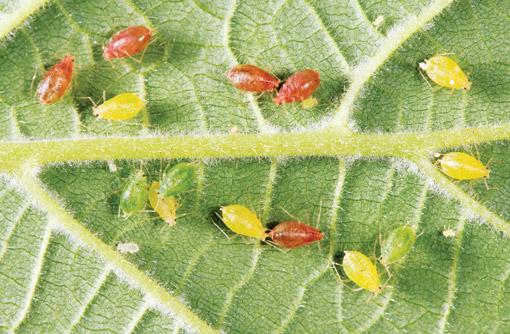 A weekly aphid alert service has helped growers minimise preventative insecticide use during the past season, believes one researcher.

“It was one of the latest in half a century, in fact, leaving only very late-sown crops vulnerable.”

However, crops are at risk for reasons other than aphid migration, he warns. Resistance is gradually limiting the armoury growers rely on to control the numerous aphid species carrying damaging viruses, including turnip yellows virus (TuYV) and barley yellow dwarf virus (BYDV).

The appearance in the 1990s of MACE resistance, a mechanism that peach-potato aphids use to overcome pirimicarb, is being mirrored now in southern Europe against neonicotinoids.

That poses a significant future threat to aphid control in the UK, warns Steve Foster of Rothamsted Research. And pyrethroids are not reliable as an alternative to neonicotinoids.

He co-ordinates a project which collects and tests peach-potato aphids from field and protected crops with a range of current and novel insecticides, to highlight shifts in sensitivity in the insect population.

By anticipating the problems with peach-potato aphids and grain aphids through a separate HGCA/Potato Council-funded project, he can advise on control decisions.

“We need to know how widespread resistance is and whether new resistance mechanisms are appearing in the field to further reduce aphicide activity. It’s particularly important with treatments coming and going due to political pressure, as in the recent case of the restriction on neonicotinoid seed treatments from December in crops attractive to bees,” explains Dr Foster.

The European Commission’s decision affects all oilseed crops, maize, and any cereal crop sown between January and June. But with peach-potato aphids and cabbage stem flea beetle at large, the neonicotinoid restriction is likely to impact most on oilseed rape production, warns Caroline Nicholls, HGCA research and knowledge transfer manager.

About 60% of the total crop area is affected by TuYV, with average yield loss estimated at 15%. Without insecticides, the calculated annual loss to TuYV is 206,010 t, costing the industry approximately £67m a year, she says.

“All the alternatives to neonicotinoids for autumn use against the peach-potato aphid have resistance issues of their own, so an increase in the incidence of TuYV is likely. We must support work to find solutions and guidance for growers.”

Further research will help to rationalise the use of insecticides, save money on inputs, reduce harm to aphid natural enemies and lower the risk of insecticide resistance developing, she concludes.

If you have problems controlling peach-potato aphids and suspect resistance to insecticides other than pyrethroids and pirimicarb, contact stephen.foster@rothamsted.ac.uk

Plus Research Review 77: Implications of the restriction on the neonicotinoids, imidacloprid, clothianidin and thiamethoxam, on crop protection in oilseeds and cereals in the UK.

• Testing existing and new aphicides to guide decision-making on treatments

Growers are being kept well informed, with projects alerting them to likely pest infestations, resistance issues and the implications of insecticide restrictions. This research should be continued to ensure effective control of aphids as new threats arise.

Catch up with previous Research in Focus articles