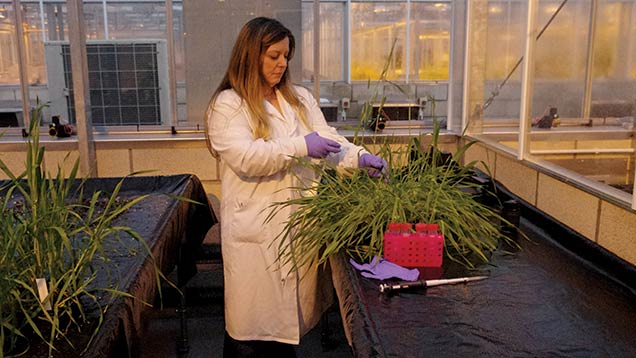 The number-one pathogen of UK barley is estimated to be causing average yield losses of 10%, even where fungicides are used, which equates to an annual loss of £7.2m.

“It is not surprising that growers have difficulty in controlling the disease when you consider the complexity of the rhynchosporium pathogen and its often asymptomatic development, says Anna Avrova of the James Hutton Institute.

“The natural resistance genes present in some UK barley varieties are largely being overcome by new strains of the pathogen.”

Rhynchosporium produces many proteins to help evade barley’s immune system. Some of these proteins can be detected by barley, leading to resistance. If scientists can find barley material that recognises the proteins essential to infection, they can incorporate these “protective” genes into new varieties.

Dr Avrova first sequenced the genome of the pathogen to identify the proteins that can be involved in the infection of barley.

This project should greatly improve our understanding of rhynchosporium biology and the infection process, helping us develop durable disease resistance in barley to reduce reliance on fungicides.

Then she looked at whether these proteins are present and conserved in all sequenced strains of pathogen. With this knowledge, she can predict how durable any resistance found is likely to be.

“The reason resistance mechanisms have broken down is that they involve recognition of non-essential proteins. The pathogen simply stops using the proteins and thus avoids recognition,” she explains.

The two main resistance genes incorporated into Recommended List varieties are Rrs1 and Rrs2. Dr Avrova points out that Rrs1 recognises protein missing in more than 45% and modified to avoid recognition in many more pathogen isolates.

Similarly, while most new resistant spring barley cultivars carry Rrs2, their continued use has led to rapid breakdown of this resistance.

The John Hutton Institute has an extensive collection of barley landraces from the centre of barley diversity.

A project funded by the BBSRC Crop Improvement Research Club is exploiting this collection and the rhynchosporium genome sequence to identify and characterise novel sources of resistance.

Meanwhile, the institute’s PhD student Louise Gamble is using state-of-the-art pathogen genomics to identify and characterise rhynchosporium genes activated at the early stages of barley infection and to see whether these key genes are present, missing or modified in genome sequences of nine different strains.

“Ideally, if we can find novel sources of resistance to recognise proteins in the pathogen that are at low risk of being modified, we can exploit them. It may then be possible to reduce fungicide use in the crop,” she hopes.

Rhynchosporium strains under the spotlight include the super-virulent AU2 strain, sequenced recently by German collaborators. It overcomes both Rrs1 and Rrs2 as well as Rrs4 and some other unknown resistance genes. One of the tested UK barley varieties was able to withstand infection by AU2, which offers some promise.

It is known that the pathogen can grow in the plant without producing lesions, so to track the progress of the disease and characterise resistance, Ms Gamble is using a strain that was modified to produce a green fluorescent protein during a previous HGCA-funded project.

The hope is that better understanding of host-pathogen interaction and pathogen recognition will significantly improve resistance in the field. Any useful genes can be exploited by plant breeders, concludes Dr Avrova.

“Rhynchosporium remains the most damaging disease of barley in the north and west of the UK.

“Selecting barley varieties with good disease resistance ratings is recommended where disease pressure is high. However, sustainable strategies for rhynchosporium management depend on further understanding the biology of the pathogen and its interactions with barley.

“In particular, we need to get a better handle on crop/pathogen genetics to assist with the development of varieties with durable disease resistance.”