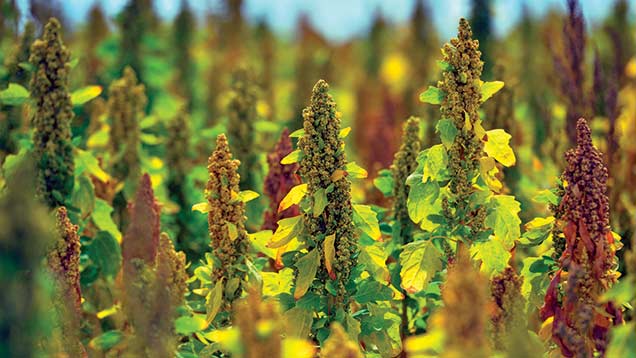 Growers could soon have more premium spring options to choose from, as UK researchers look to develop crops such as haricot beans and naked barley to satisfy the rising interest in spring crops.

This spring interest is reflected in the latest HGCA grower survey figures, which show winter wheat and oilseed rape sowings are down by 5% and 4%, respectively, on last season.

That comes as no surprise to David McNaughton of Soya UK, who as a seed supplier of non-conventional crops, watches the figures with interest.

“I can think of at least four good reasons for a shift away from mainstream winter crops this season. Prices are down, and then there are two important agronomic considerations that may further affect profitability.

“Introducing a spring-sown crop can be more sustainable than maintaining a wheat-rape-wheat rotation when it helps you to overcome the most pernicious weed of arable systems, blackgrass.

“And there is justifiable concern about how to tackle flea beetle in oilseeds without neonicotinoid seed treatments.”

Lastly, the CAP three-crop rule has undoubtedly influenced cropping plans, he says. This season, to qualify for the Basic Payment Scheme in England, growers with more than 30ha of arable land must grow at least three crops.

Mr McNaughton hopes this rule will open more doors for soya and other novel crop species.

“With prices of just £120/t for feed wheat and £250/t for oilseed rape, growers should look seriously at the alternatives. For example, we are offering £300/t for soya, making the average gross margin about £500/ha.”

But it’s not just the bottom line that growers need to think about when deciding whether or not to grow a particular crop, he warns. They should consider the reliability of producing a quality sample under their farming conditions over many seasons.

“We’ve seen numerous crops come in that have ticked all the boxes, but ultimately fallen down on one thing – consistency of marketability. Where other beans might have struggled to make the grade due to skin cracking, soya has made it because it is pulped and cooked. Quality criteria must be clear.”

Chris Green of Senova, who has been directly engaged in introducing at least eight novel crops to the British market since the 1970s, warns that they carry risk and are not a panacea.

He confirms what is needed is both a primary market and also a secondary outlet for produce that falls short of quality specifications.

“The failure of durum wheat in the 1970s highlights the importance of securing markets for substandard produce – in that case it was sprouted grain. A good outcome relies on pull rather than push – that is, the demand must be there.”

Production is for consumption, so partnerships with buyers are the key to success with a new crop, and there must be profit throughout the value chain, he stresses.

Eric Holub of the University of Warwick agrees that consumer demand plays a huge role in the success and sustainability of any novel crop. In his view, it also requires direct participation of primary producers in the process of breeding new varieties specifically adapted to their growing region.

He recently relaunched efforts from public and private investment in the 1980s to evaluate varieties of haricot bean that are adapted to our climate. Currently, the key ingredient of the much-loved British staple beans on toast – the small white haricot – is grown abroad.

“We have been thinking out of the box about haricot beans, or rather, about getting the beans out of the traditional can. British-style baked beans are a great source of vegetable protein, and an essential comfort food when we need something fast and nutritious on a plate. However, there’s untapped diversity in this crop.”

Where there is a confirmed nutritional benefit from a novel crop, the job of finding markets becomes easier, says Niab’s Effie Mutasa-Gottgens. Niab has been working with Technology Crops International for 10 years to develop a plant with a source of omega-3 fatty acids to rival those in flaxseed and provide a dietary supplement for fish oils.

“The market for fish oil to reduce cardiovascular problems and increase cognitive ability is high, but fish stocks are dwindling. Flaxseed contains a type of omega-3 fatty acid called alpha-linolenic acid that isn’t very efficiently converted in our bodies, whereas ahiflower contains high levels of stearidonic acid, which is.”

There is good news for growers, too. Ahiflower, originating from the plant corn gromwell, is reportedly easy to grow and offers a potential gross margin of £975/ha. At the moment the crop is being grown under tight contracts.

Growing something that you are more familiar with and can sell through the usual channels may be preferable for some farmers, suggests Katherine Steele of Bangor University.

She and her team recognise there would be good market potential for a novel type of barley that could offer nutritional benefits without the need for specialist markets and processors.

Naked or huskless barley contains up to 5% beta-glucan – which doesn’t raise blood sugar levels as much as oats.

“We have bred a two-row spring-sown barley variety using germplasm from the variety Static. Deiniol has good disease resistance and early maturity, and at current yield levels, it should be cost-effective to produce. We will try to increase yield further, confirm seed purity, then find a company to market it.”

Rod Scott of Crop-Innovations says widening the cropping base by introducing such novels crops will not only offer growers new opportunities, but it should reduce vulnerabilities.

“Agricultural diversity would spread the risks on farm, decrease the UK’s reliance on imports, and help us to react quicker to climate change. There has never been a better time to develop novel crops,” he concludes.