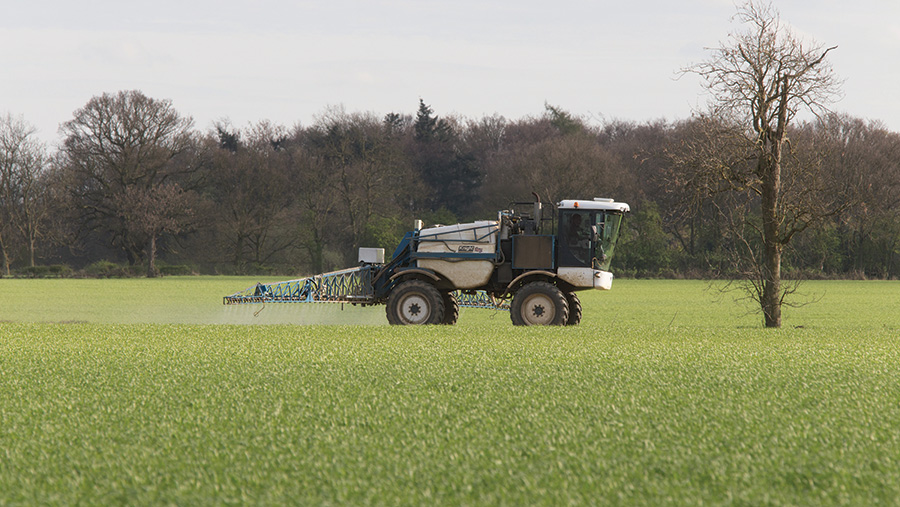 It takes courage not to use a full fungicide programme against septoria following the worst disease season on record.

However, with hindsight, last season many growers could have reduced their chemical bill

That is according to Neil Paveley, crop protection lead at Adas, who adds it would also have helped prolong the active life of fungicides.

“The number-one pathogen of UK wheat [septoria] was at low levels in 2015 after a high in 2014, so there was the opportunity to cut back the spend on one or even two sprays.”

Dr Paveley and collaborators on the project are assessing the benefits of forecasting against field trials data. Adjusting fungicides based on a disease forecast is risky on disease-susceptible varieties because changes in the weather cause fast changes in the epidemic.

However, disease forecasting is much more reliable in resistant varieties, and the downside of the forecast being wrong is reduced, he says.

Collaborators at Rothamsted have shown that as well as helping gross margins, targeting inputs could delay fungicide resistance by several years.

The number of fungicide treatments is the key driver of resistance.

Over the past 25 years, growers have increased the frequency of spraying from an average of two to three or four treatments a crop (see chart).

The announcement last December of septoria isolates displaying greatly reduced sensitivity to SDHIs was a blow to the industry.

Scientists had known from laboratory tests that there was a high risk of a gene mutation in the SDHI target site, and one such mutation – C-H152R – came to light in field samples from Ireland and then last month in the UK.

How serious and widespread the problem becomes remains to be seen.

“Disease-susceptible varieties occupy much of the wheat area and there has been a recent trend towards more fungicide applications.

“This project aims to guide growers on how best to use fungicides to improve their effective life, and improve disease-forecasting risk assessment to aid control.”

Much will depend on whether the mutation has a fitness cost to the pathogen.

Losing control of septoria would put the UK wheat industry at a competitive disadvantage to mainland Europe. Frag-UK issued guidance in response to the recent discovery.

“To avoid losing the efficacy of fungicides we must slow selection pressure for further resistance development. In particular we need to maintain the efficacy of the SDHIs until new chemistry is forthcoming.”

Plant breeders play a key role in slowing epidemic development and the evolution of resistance by providing varieties with inherent resistance to septoria.

Dr Paveley is working to encourage variety development and raise the importance of disease-resistance criteria for inclusion on the Recommended List.

Many recent RL entries and proven varieties offer septoria resistance ratings of 6, and varieties Siskin and Graham have ratings of 7.

Growing such varieties coupled with responding to forecasting could halve the rate of fungicide resistance evolution and double how many years fungicides keep working, the work suggests.

“Using a combination of field trials and modelling, we are identifying effective methods to protect precious chemistry,” he concludes.

The project will formulate integrated strategies for slowing resistance to wheat fungicides, including the role of disease resistance in varieties selected for the Recommended List