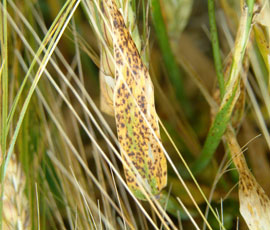 Ramularia leaf spotting should be regarded as a major barley disease that merits official variety resistance ratings, according to the SAC‘s Neil Havis.

It saps an average of 0.4t/ha from Scottish crops, losing malting barley growers an estimated £10m a year, he told the Association of Applied Biologists‘ Crop Protection in Southern Britain.

Although there was evidence from Rothamsted that the fungus had been around in the UK for 150 years, it only began to attract attention in 1998. Since then it had continued to spread east across Europe, probably linked to a decline in the effectiveness of strobilurin fungicides, Dr Havis said.

By 2009, its DNA had been found as far afield as Devon and Norfolk – the latter previously considered a ramularia-free area.

“We know it’s seed-borne,” he added. “But we’re not sure about the impact of air-borne spores within the crop.”

Early fungicides could help reduce epidemics, but the best defence seemed to be treatment at GS45-49 (boots swollen).

There were no fully resistant varieties, although Pearl and Decanter appeared relatively tolerant winter and spring types.

New ways to counter the emerging disease, including breeding more resistant varieties and finding effective seed treatments, were being explored in a four-year BBSRC/HGCA project called Coracle, he noted.