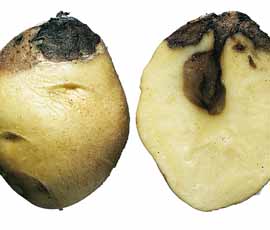 Seed potato growers need to refocus on their management of blackleg after the largest area of seed potato crops was downgraded or rejected for the disease since the early 1990s.

“Control is in your hands,” Stuart Wale from SAC reminded growers at the Scottish Agricultural College Association of Potato Producers conference. “We may not be able to eliminate it, but we know a lot about damping it down.”

Around 10% of seed stocks were either downgraded or rejected in 2011 because of the classical blackleg disease, Pectobacterium atrosepticum, Gerry Saddler, deputy director of SASA, reported. Over 60% of crops in the seed classification scheme had at least one blackleg-infected plant found in them during an inspection.

“It was a bad year, but it would be wrong to panic,” he stressed.

Controlling blackleg was an all-year-round task, Dr Wale said, but both seed and ware growers could help reduce the risk to next year’s crops between now and planting.

Preventing rotting tubers contaminating clean tubers when grading out of store was a key first step, Dr Wale said. Research from as far back as 1986 had showed that just one rotting tuber on a grading line would infect every single one of the next 200 tubers passing over the grader.

“And the more bacteria on the seed at planting, typically the more blackleg in the following crop.”

Another experiment had shown that even after 600kg of clean tubers had passed over the grading line since a single rotting one, contamination could still occur.

Dr Wale advised growers to inspect boxes carefully to judge their risk. “There are a lot less rotten tubers in boxes this season, but rotting tubers going across the grading line are something you must avoid.

“If you can only find on average one or less rotting tuber on the surface of each box, and you can pick it off early from the hopper or the tippler, then your spread to other tubers will be minimal.

“If you have between one and five rotting tubers on the surface then you’ve got a high risk of bacterial spread, and I think you’ll have to work pretty hard to pick them off and hopefully at the other end of the grading line dry them as quickly as you can to stop any spread.

“If you have more than five you should really put the box back and blow it hard, because once those rots have pruned up there is no risk.”

Growers also needed to avoid moisture accumulating during grading, which could create a nice environment for bacterial spread in polyprop bags. “So where possible it is good to get air around the bags and put them on pallet, so taking the moisture away.”

For those receiving seed, the advice was to decant into boxes unless planting immediately, ventilate with cool air, and wherever possible restrict sprout growth.

“It is also important to avoid de-sprouting when planting; control other diseases such as rhizoctonia; and plant into warm soils to give the crop a chance, rather than the bacteria.”

Read more from the SAC Association of Potato Producers Conference on our dedicated page.