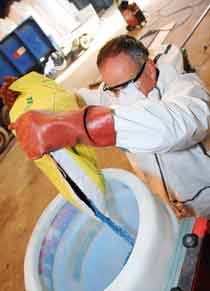 Tough new restrictions on the use of metaldehyde slug pellets are being recommended by the Metaldehyde Stewardship Group for this autumn, following new research.

The advice is not to apply more than 210g/ha of metaldehyde in a single application or in total during the period 1 August to 31 December.

The recommendations have been made following water catchment studies in the Cherwell valley suggesting that up to 98% of the metaldehyde detected in water in the catchment came from diffuse losses through the soil profile in a worst case scenario of heavy rain and flowing field drains.

In contrast, direct application of metaldehyde into water contributed to just 0.2% of field losses, while 1.1% came from contaminated equipment, Colin Myram, a spokesman for the Metaldehyde Stewardship Group, said.

The new guidelines have reduced the maximum dose from 250g/ha, and impose a new autumn total dose limit. Previously the only restriction for that period was not to exceed the 700g/ha total for a calendar year, Mr Myram said. “It is vital metaldehyde is not applied if drains are flowing or when field moisture capacity is nearing its maximum and heavy rain is forecast. If further treatment is necessary then alternatives will need to be considered.”

To comply with the Environment Agency’s 2011 deadline for the industry to bring metaldehyde detected in water to acceptable levels, slug pellet rates needed to be cut as much as possible, he stressed.

Other recommendations from the group included that no pellets should be applied within 6m of a watercourse or ditch and to not apply when heavy rain was forecast, he said.

Research also showed that spreading in 12m bouts gave the most even spread and the maximum width with no side wind should be no more than 13m.