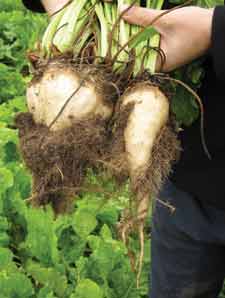 The longer sugar beet farmers delay switching to rhizomania-tolerant varieties the more the inoculum in soils will build, increasing pressure on varieties and hastening the spread of newer, more aggressive types of the disease where the virus is present.

Broom’s Barn’s Mark Stevens agrees about the importance of the disease, and the need to use tolerant varieties where there is high risk of rhizomania, but believes there remains scope for sowing susceptible varieties on some farms next season. However, under a change in testing protocols from 2010 all varieties entering recommended list trials must be rhizo-tolerant anyway, he points out.

Mr Munnery’s view is based on his own observations and BBRO maps of known outbreaks of the disease, which can slash yields by 70%.

He expects East Anglia will follow France, Holland, Belgium, Italy and Germany and grow only rhizo-tolerant types next year. But he believes the map highlights dangerous complacency towards the disease among some growers in Lincolnshire and Nottinghamshire which could prove costly.

“Looking at these maps I would question why we’ve not seen any recent rhizo samples in some of these areas despite its presence being identified by the previous aerial surveys?” he asks.

Some rhizo patches last season in the Newark factory area, where he believes lower than average sugar contents could be partly due to the disease, were quite large, he adds.

From the size of the patches they couldn’t have occurred “overnight”.

“BBRO work has shown susceptible varieties increase inoculum build-up by a factor of seven, so you propagate the problem for the future.

“It’s, therefore, very dangerous to point to the high proportion of sales of susceptible varieties and imply that this is evidence that there is no problem out there,” says Mr Munnery.

Rhizomania continues to spread across the whole of East Anglia, acknowledges Dr Stevens. “So varieties with rhizomania resistance should be used to protect yield and prevent further spread of this devastating disease.”

Farms in Lincolnshire and Nottinghamshire are certainly at risk, as highlighted by several new cases last season, he notes. “Growers do need to vigilant and switch if they or their neighbours discover rhizomania. Apathy is no excuse with this disease, as it will have a much bigger effect the next time the field goes into beet.”

But there are several regional factors that differ from those in East Anglia resulting in slower disease spread on some farms, he says.

Those include fewer sources of inoculum and differences in soil types. Many farms in the area have heavier land, which takes longer to warm up in spring and so gives the fungus which transmits the rhizo virus less time to cause infections.

Some patches there initially thought to be caused by rhizo later turned out to have been caused by nematodes, he adds.

Mr Munnery believes much more needs to be learned about the various types of the disease, their aggressiveness and how some may be able to overwhelm resistance mechanisms.

Some of the range identified by plant pathology departments elsewhere in Europe do not show leaf symptoms yet still erode yield, he notes. “We’re on a steep learning curve, so we need to monitor carefully.”

Dr Stevens acknowledges that there are several types of rhizomania in the UK, including what appears to be a new strain so far confined to eight fields around Woodbridge, Suffolk.

But the practical implications of that could be over-played, he suggests. “I don’t want to put people off from changing to rhizo-resisters because of this problem.

“Yes, the strains of rhizomania are changing in the UK, but those changes are highly localised and being closely monitored. We haven’t detected any symptomless strains in the UK so far.

“At present, it’s not clear which strategy to adopt to prevent new strains occurring, as potentially they could be selected by susceptible or resistant varieties.”

Both men agree that more growers should be prepared to take advantage of Broom’s Barn’s diagnostic service to test samples of beet suspected of being infected by the disease this season.