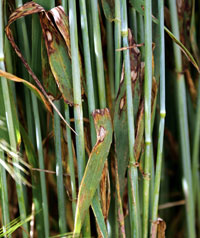 The first indication of resistance developing to strobilurin fungicides in the barley disease rhynchosporium (pdf) has been found during extensive testing in 2008.

One isolate, collected in northern France, was found to contain low levels of the G143A mutation that caused Septoria tritici and powdery mildew to become resistant to strobilurin treatment, ADAS’s Jonathan Blake said.

“I don’t think it is a problem yet and it may not spread as quickly as mildew or septoria, but it something we need to monitor.”

Fungicide Resistance Action Committee monitoring of net blotch during 2008 found a separate, F129L, mutation frequently in net blotch populations in the UK. This mutation tends to cause lower resistance to strobilurins, and field performance remains good, although there is some evidence from the HGCA trials of differential performance from the strobilurins tested.