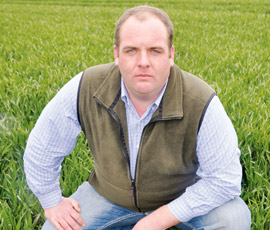 Last minute changes to T2 sprays were being made by Cambridgeshire grower William Nicholls ahead of planned applications to winter wheat, following April’s heavy rain and high winds, as Crops went to visit him at the beginning of the month.

Fungicide rates were being increased to counter the rising septoria threat, the addition of Bravo was being considered and PGRs were being included, despite previous applications to manage lodging.

“Crops are looking a bit lodgy,” he admitted. “And some of the oilseed rape is already starting to lean. So we’re taking all the precautions and spending an extra £9-10/ha to keep them standing.”

Farming 485.5ha (1,200 acres) at Home Farm, Mr Nicholls of TJ Nicholls, Bythorn, near Thrapston, completed his T1 sprays well before the end of April, using a Tracker/Curator mix. “I would rather be in front of any disease, than chasing it. And the conditions this year mean that good protection is essential, especially where septoria is concerned.”

The first sclerotinia spray to all of the oilseed rape had also been done. “I’m not too concerned about sclerotinia this year because it’s been so cold. But we have had the disease on the farm in the past, so we maintain protection against it.”

With KWS Santiago, Oakley, Gladiator and Cordiale in the ground this year, all of which have susceptibility to one or more diseases, he believes in investing in fungicides and tends to use the same programme across all the varieties, regardless of end market.

“I am a high-input grower,” he acknowledged. “It would be very unusual for us not to do a four-spray programme.”

He had seen signs of yellow rust in the Oakley, but noted that rain since April means that septoria has become the greater concern. “We know that we have to be on our guard against yellow rust, so that’s built into our spray programme.

“But we haven’t had the same septoria pressure in recent years, due to the dry springs.”

Mr Nicholls tried some of the new SDHI chemistry last year at T2, with very good results. Around 60ha of his wheat was treated with Seguris and compared with either a triazole or a triazole/boscalid mix.

“We used it in whole fields and also in split-field comparisons,” he recalled. “It was all applied to first wheats.”

He described the results as outstanding and well beyond his expectations. “It wasn’t a high disease pressure year and visually there were no differences at all, yet on each variety we got a yield benefit of up to 1t/ha. And the only difference was that they received Seguris at T2 at a rate of 0.8 litres/ha.”

His average wheat yield is 10t/ha, but this was down in 2011. “To be honest, we expected yields to be worse than they were after such a dry spring. In fact, they averaged 8.5t/ha.”

For 2012, he is intending to repeat his use of Seguris. “However, given the rain that we’ve had, I’m either going to increase the rate, add in some Bravo or even do both. It won’t cost much more, but it will provide the extra insurance.”

He has taken advice on whether Seguris can be mixed with Bravo and has received the assurances that there’s no antagonism between the two.

“It also gives the SDHI component additional protection from resistance, as well as help with septoria.”

He plans to apply the T2 spray at a water volume of 100 litres/ha, travelling at 12-14km/hour, depending on the weather, with Amistar nozzles. “I’ll be following Syngenta’s advice on application. It’s always worked well for me before.”

Mr Nicholls doesn’t envisage making any changes to his T3 spray, despite the greater persistence of SDHI chemistry.

“I like to use a strobilurin at T3, even on the feed wheats. So our plan is to use a Proline/Amistar mix. With that combination, we can use a very low dose if it’s dry.”

Cheaper options are available, he agreed. “But I’m not convinced. This is the first year that the SDHIs are really going to be tested at the farm level, so we don’t yet know whether they will deal with septoria right through until the end of the season.

“Things are more extreme this year. I’m not prepared to compromise disease control at the final spray timing.”

The aim of this Crops campaign is to help growers to maximise wheat yields by giving best-practice advice and information on managing wheat to help you achieve this.

Catch up with previous pieces in this series by visiting our dedicated website at www.fwi.co.uk/winningwithwheat