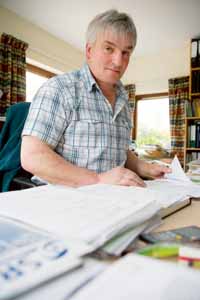 Last night I attended my first ever meeting of the WI. I had been asked by the NFU to talk about the resolution regarding “Factory farming” which is to be discussed at the AGM.

This proved to be to a more demanding assignment than the two radio interviews that I have done in the last 24 hours about guess what? The drought and the effect it will have on food prices in the shops. After talking about the resolution and, hopefully, giving a balanced view I took questions for 25 minutes which were over a wide range of areas and obviously my audience read their broadsheets more than I did! I came away understanding the

considerable influence that the WI has as opinion formers and wish Peter Kendall well when he speaks to the WI AGM on 8 June about the resolution. I must encourage Frances to join the WI although when she approached them a few years ago she was told that she wasn’t old enough!

When I walk out of the local RPA “Drop in Centre” having deposited my forms it is always as if a great weight has been lifted off one’s shoulders, while year-on-year they are easier to complete, as usual, I found myself undertaking the task in the absence of last year’s payment and any entitlement or claim statement.

While I won’t dwell on the potential of this year’s harvest and a lot of us look forward to the time when we can look across bare stubbles instead of viewing what we have at the moment, traders unable to tempt growers with forward grain sales have launched into the nitrogen fertiliser season instead.

Read more from Robert and our other Arable Farmer Focus writers.