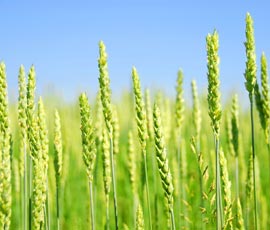 Rothamsted Research has been given the green light to extend its GM wheat field trial to include autumn-sown Cadenza wheat.

DEFRA granted Rothamsted permission to plant GM wheat this autumn that has been genetically engineered to repel aphids, a major crop pest.

The GM wheat produces a naturally occurring odour, (E)-β-farnesene, that not only repels aphids but also attracts their natural enemies, such as ladybirds and wasps.

A crop of spring-sown Cadenza GM wheat is currently in the ground at the agricultural research centre in Hertfordshire, for the final year of a two-year trial.

They believe planting the wheat at a different time and under different conditions with different aphid populations will allow them to gain further data from the experiment.

John Pickett, head of chemical ecology at Rothamsted, said: “With the trial up and running, it seems sensible to make this small adjustment. Autumn infestations of aphids are a real problem too, especially with the varied weather we are having.

“This additional data will add a lot of value to the overall investigation by testing our wheat plant under a more varied range of environmental conditions throughout the year and in accordance with the different times of the year farmer’s plant their wheat.”

Rothamsted submitted a request to DEFRA in March to extend the trial, which was assessed by the independent Advisory Committee on Releases to the Environment (ACRE), and by members of the public through a 60-day consultation period.

ACRE is satisfied that all scientific issues raised by the public with respect to this application have been addressed.

The autumn sowing extension of the current field trial that Rothamsted will involve exactly the same GM lines and the experimental design as the current spring-sown experiment.

The autumn trial will be sown in mid-September and destroyed after 10-12 weeks in late November or late December, depending on the weather.

Maurice Moloney, Rothamsted Research director, said: “We are very grateful to DEFRA for granting this extension, and to ACRE for their independent and thorough scientific scrutiny of our proposal.

“We worked hard last year to engage the public and listened to their views. The more data we can gather, the more evidence we will be able to obtain for government and society to make decisions whether they wish to explore this next generation GM technology further.”

Wheat is the most important UK crop with an annual value of about £1.2bn. Currently a large proportion of UK wheat is treated with a broad spectrum of chemical insecticides to control cereal aphids, which reduce yields by sucking sap from plants and by transmitting barley yellow dwarf virus (BYDV).

Unfortunately, repeated use of insecticides often leads to aphids developing resistance, while killing other non-target insect species including the natural enemies of aphids, which could have further impacts on biodiversity.