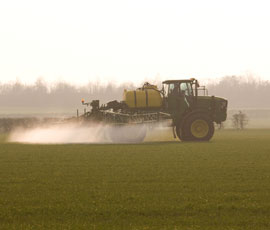 The GM wheat trials at Rothamsted have hit the headlines, but what are the researchers hoping to achieve and how? Senior research scientist Toby Bruce explains

Why are you focusing on controlling aphids?

Cereal aphids, such as Sitobion avenae and Rhopalosiphum padi, are well-known insect pests of wheat. They suck sap from the plant and drain it of nutrients. They also transmit barley yellow dwarf virus and can lead to fungal infection. Insecticides have been the mainstay of crop protection against these pests and have provided effective control. However, farmers face pressures from consumers, supermarkets and the EU to minimise insecticide use. Furthermore, overuse of insecticide can lead to a build-up of insecticide resistance.

To achieve food security for a growing global population, it is important to reduce losses to cereal harvests caused by pests. These losses mean that the resources (land, water and fertiliser) used by agriculture are wasted and more are needed to produce the same amount of food. Preventing losses to pests makes agriculture more efficient and reduces its environmental impact. For these reasons it is vital we develop new solutions for crop protection.

What is the purpose of the plot trials and how do plants repel the aphids?

The GM wheat trial at Rothamsted is a small plot field experiment designed to test if new wheat plants, engineered to emit an aphid repellent, have lower aphid infestations under real field conditions. The plants emit a smell which aphids do not like. It is a signalling chemical called the alarm pheromone and is naturally produced by aphids when they are attacked by a predator to warn other aphids.

When they smell it the aphids run away. Furthermore, it also attracts natural enemies such as parasitic wasps and ladybirds which attack the aphids. By utilising these signalling chemicals (also known as semiochemicals), we are using a non-toxic approach to crop protection and we are making the crop environment more attractive for natural enemies of the pests. This contrasts with conventional control in which natural enemies are often killed by broad spectrum insecticides.

How was the gene introduced to the wheat plants?

The team at Rothamsted designed a synthetic gene construct encoding production of the aphid alarm pheromone which was based on a gene from peppermint plants. It allows plants to produce the repellent smell, (E)-β-farnesene. The gene was inserted into the wheat cultivar “Cadenza”. This was done by coating the gene onto the surface of very small gold particles which were shot into wheat cells using a device called a gene gun.

How do the plants differ from conventional ones?

The GM plants look exactly like the “Cadenza” they were derived from, albeit that they smell different. Chemical analysis has shown that the GM wheat plants produce very pure aphid alarm pheromone. For repelling aphids this is better than the peppermint plant itself, which produces other smells that reduce the aphid response. Laboratory experiments have shown that the GM wheat repels aphids but that foraging parasitic wasps prefer the GM plants. While this is encouraging, the plants need to be tested under real conditions in the field, which is what we are doing now.

What area of GM crop is being grown and how is it being managed?

The plants were sown on 22 March this year. The trial is quite small, with a total area of 80m x 80m including non-GM controls and spacing between GM plots. It has eight 6 x 6m plots of GM wheat and eight plots of non-GM “Cadenza”. Standard fertiliser, herbicide and fungicide applications will be made, but no insecticide will be used in the trial. Field experiments will be repeated again in 2013.

What precautions have you had to put in place?

Because this is a GM crop we had to apply for permission from ACRE (the Advisory Committee on Releases to the Environment), the regulatory authority for permission. As part of that process we had to carry out a thorough risk assessment, details of which are available on the ACRE website. ACRE said it was “satisfied that all appropriate measures have been taken to avoid adverse effects to human health and the environment from the proposed release”.

How are you ensuring there is no cross-contamination of pollen or seeds to crops outside the trial area?

The probability of seeds moving from the trial site or the transfer (via cross-pollination) of inserted characteristics to sexually compatible species outside the trial area is estimated as very low. Wheat seeds and wheat pollen grains are relatively large and not normally dispersed by wind. The GM plots will be separated from the edge of the trial by a “pollen barrier” of wheat that helps to contain pollen from the GM plants within the trial site. All these plants are treated as though they are GM and harvested/destroyed at the end of the trial.

There will be no cereals grown for 20m outside the boundary of the site and no wild relatives of wheat that can cross with our cultivated variety exist in the vicinity. In addition, we have put in place strict management procedures to minimise the spread of seeds or pollen. Couch grass species – distant relatives of wheat – will be controlled in a 20m-wide area around the trial site to avoid any slight possibility of cross-pollination. We will ensure that suitable measures are in place to keep pigeons and other large birds out of the trial site during and after sowing and at the first signs of emergence of wheat ears.

Do you see this trait being commercialised and what benefits could it offer growers?

It would be premature to speculate about commercialising the crop because we first need to get the results of the trial to find out if the plants do control aphid pests under real field conditions. If successful, these plants could provide a possible alternative to insecticides and a non-toxic eco-friendly approach to pest control. However, we are taking it a step at a time and the next step will be to assess aphid infestation in the field. We are not growing a commercial product, but instead conducting a scientific experiment.

If the experiment gives us data suggesting that there may be viable environmental benefits to this type of genetic modification, then further experiments could be conducted to make a similar modification more like a commercial product. To produce a commercially viable crop that can repel aphids and is fit for human consumption requires further experimentation and regulation, which is way down the road and not the main purpose of this specific experiment at this stage.

Take part in Farmers Weekly’s live web chat about GMs between 1 and 2pm on Thursday May 24.