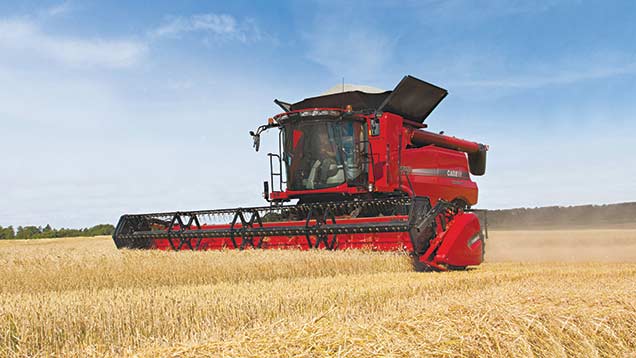 No reuse: Pic submitted by Peter Hill for Crops, September 2015

It is that time of the year when combine manufacturers unveil new technology and features aimed at helping next year’s harvest run more smoothly.

Features include tracks to help reduce compaction plus improved separation systems, offering benefits such as eliminating the risk of time-consuming crop plugs and another manufacturer claiming a 15% lift in performance potential.

Slopes are a particular obstacle at harvest and an active levelling system is now available at a lower cost. Here we round up the key changes for 2016.

See also: Read the latest news and reviews on combines

Optional tracks to reduce compaction, upgraded grain handling plus a new cleaning system are all evident on new Axial-Flow 140 Series combines for the 2016 harvest.

Case IH has approved Zuidberg’s F-type track system as an alternative to traditional wheels and tyres for the three models, which now have a hydrostatic transmission with four rather than three speeds.

Auto-shifting between the two ranges is available and heavier duty final drives from the bigger 240 Series combines complement the new transmission.

Faster movement of crop into the combine is promised by increasing the number of slats in the crop elevator, the stone trap has been uprated and the feeder housing bolstered – all to better cope when a 9m cutting table is in use.

Speeding up the grain transfer augers and adding a sixth auger also gets grain shifting through the combine faster and the elevating augers to the grain bins have been uprated with the same purpose.

Removable grain transport auger bottoms complement the “power clean-out” system that can be used to air blast residues from the cleaning area between crops.

But the biggest change in this area is the cleaning system itself, which is a new design with slope compensation for the first time on these Axial-Flow models.

When sensors detect the combine moving on to or off a slope, the top sieve oscillation is modified left or right as appropriate to keep the grain spread evenly across slopes up to 12deg.

Reducing the size of individual concave sections for the single threshing-cum-separation rotor makes it easier for the operator to replace them single-handed and service access has been improved by allowing the unloading auger to swing out of the way.

Push button engagement of auger drive does away with the old-fashioned mechanical control and operators can place grain into trailers with greater precision if the optional hydraulic auger spout is added.

Operators of new Claas Lexion rotary separation combines will push on with greater confidence in next year’s harvest thanks to additional automation designed to all but eliminate the risk of time-consuming crop plugs.

If sensors on the engine, APS pre-threshing drum and the Roto Plus separation rotors detect a potential overload, drive to the feed elevator and table is cut to stop crop inflow and forward speed is reduced.

Grain discharge will be interrupted if the auger is engaged to release maximum power to the threshing and separation systems.

The sensitivity of the slip limits can be set in three stages or the system can be turned off altogether. But Claas believes it should help operators work closer to the combine’s performance limits, especially when conditions are less than ideal, to lift output.

A revised residue management system can save power and can now be switched on and off in the cab, from where the stationary knife and friction concave plate can be adjusted, making it easier to fine tune the settings.

A larger-diameter flail tube increases knife-tip speed and the spreading discs are now driven mechanically rather than by hydraulic motor so they should keep spinning more effectively under increased load.

They are no longer driven when laying a swath, which saves some power.

Smaller-volume six-cylinder engines are now installed, with gains in power and torque on some models – a Perkins 2206F diesel replaces the Caterpillar unit in the 760’s engine bay, giving an additional 13hp, 2.5% up, and ready access to increased diagnostics support and the like.

While the Lexion 740 stays pretty much as before at 405hp and the 750 drops 14hp to 435hp, 3% down, they are compensated by the Dynamic Cooling system with its hydraulic fan drive, which can save as much as 15hp.

Automatic crop-flow monitoring aside, the most significant internal change is the optional 4D Cleaning system, which automatically adjusts grain distribution across the sieves when the combines are working across a slope, and also adjusts cleaning fan speed when working up and down an incline.

Increased threshing, separation and cleaning area is said to give John Deere straw walker combines a 15% lift in performance potential.

A new-design cleaning shoe for the W and T series uses aluminium to keep its weight unchanged despite an increase in sieve area – up by over 5% to more than 6cu m on six-walker models – and a redesigned fan with improved air distribution should improve performance across a wider range of fan settings.

To keep everything in alignment, the diameter of the overshot beater that follows is now 80mm bigger at 500mm and the separation drum has grown 140mm to 800mm.

Together with a new separator grate with more openings, the changes are said to result in better separation, especially when crop conditions are less than ideal.

The changes bring about a 41% increase in active separation area – to 3.3cu m on five-walker models and 4.0cu m on the six-walker T-Series combines – with the further enhancement of an additional rasp bar that can be moved into position in a matter of minutes and eliminates any need for de-awning plates when more aggressive threshing is needed for crops such as barley.

Lifting unloading auger speed to 125 litre/sec means an 11,000-litre grain tank can be emptied in fewer than 90 seconds.

The combines will tread more lightly when the newly-available track option is fitted, get to fields faster thanks to the 40km/hour top speed, turn sharper using a new rear axle with optional four-wheel drive, and put additional power to use.

The “header” technique – taking as little straw into the combine as possible – can now be applied to UK crops using a second cutterbar on New Holland combines to trim stubbles ready for cultivation.

The Dual Stream knife assembly fits the back of a Varifeed table using parallel linkage arms to keep the cutterbar level as it moves over surface contours supported by an open crumbler roller.

It allows the table to be set several centimetres higher than usual, resulting in a significant reduction in the amount of straw passing through the combine’s threshing, separation and cleaning systems.

New Hollands claims a 15% increase in capacity as a pretty conservative figure for what can be achieved, and with the further benefit of a similar reduction in fuel consumption.

Increased performance comes from running the combine faster or fitting a wider table to maintain a comfortable working speed while taking in a larger volume of grain relative to the amount of straw.

Threshing only the upper part of the crop results in being able to start earlier in the day and finish later in the evening.

However, it does restrict slope compensation to no more than 15% when the presence of a power-driven rear axle increases its scope to 20%.

Unlike solutions that pivot the combine on a conventional beam axle, ParaLevel features a bespoke axle with hydraulic parallel linkage mounting for the hubs.

Electronic level sensing automatically adjusts the linkage to keep the combine on an even keel whenever it ventures across or up and down an incline.