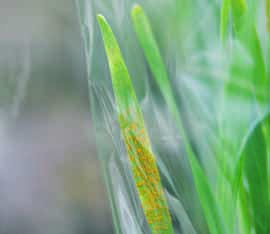 New aggressive yellow rust strains pose such a threat to global wheat production that a Global Rust Reference Center has been set up by Aarhus University, Denmark, as part of the Borlaug Global Rust Initiative.

The latter was set up to fight all emerging wheat rusts in 2006 on the back of black stem rust in East Africa, says Mogens Hovmoller, a plant pathologist at Aarhus University.

But based on numerous reports from around the world, yellow rust is more of a threat to global wheat production than the much more hyped Ug99 strain of black stem rust, he says.

“The actual situation with yellow rust is more serious than stem rust, for which we haven’t seen serious outbreaks outside of East Africa in recent years.”

The reason is the emergence of new traits within the yellow rust fungus, which is allowing it to spread into new areas of the world with increasingly devastating impacts on yields.

The increased aggressiveness of a race adapted to higher temperatures is a particular concern.

It is a race that caused the loss of almost 8m tonnes of wheat in the USA over a three-year period in the early 2000s. Before 2001, yellow rust in North America was confined to a few parts of the north-western states of Oregon, Washington and Idaho. But from 2001 it spread all through the wheat belt that extends from North Dakota down to Texas, and east into Kentucky and Alabama.

Temperatures of 30C are common in some of those states, which would usually knock out yellow rust infections. But these infections spread quickly and did not stop when the temperatures warmed up. 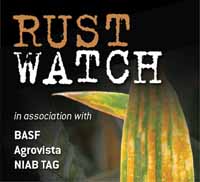 Analysis comparing yellow rust strains from the 1980s and 1990s with the new strain found the latter would grow much faster on rust-susceptible wheat varieties, and was able to produce enough spores at higher temperatures to keep epidemics going.

The strain spread to Australia and across much of Africa and Asia, presumably via contaminants spread by humans or transport, or by high-altitude winds.

The race has also been found in Europe, says Dr Hovmoller. “But we are fortunate that currently most north-west European varieties are resistant to it.”

Its emergence is partly the reason the Global Rust Reference Center was set up. “It aims to provide an early warning system for wheat rusts in collaboration with national and international research institutes and organisations under the Borlaug Global Rust Initiative.”

Dr Hovmoller’s team will analyse yellow rust strains from around the world to track changes in the effectiveness of resistance genes in current global wheat varieties. “It will help discover and confirm rapidly where new threatening races appear.”

That is especially important in developing countries, where the use of home-saved seed is common and the turnover of wheat varieties is much slower than in Europe, where as many as one-third of varieties can change year-on-year, he says.

“The consequence of a new strain of rust in the developing world, where there is also less availability of fungicides, is much greater.”

The Reference Center will also provide resources to help breeding programmes, such as those based at the International Maize and Wheat Improvement Center in Mexico and the International Center for Agricultural Research in the Dry Area, Dr Hovmoller says.

In addition to Rust Watch, this year Farmers Weekly‘s Disease Watch service is also monitoring septoria development through the season.

As septoria is virtually always present in wheat crops through the season, it is not so much its presence/absence that is important, rather its severity.

In a relatively low-risk year such as last season, where a dry May and June minimised its spread through crops, there is sometimes the opportunity to reduce doses in line with risk or to choose cheaper options.

Equally, in a high risk septoria year, it is important to keep doses high and use the strongest products to keep on top of the most damaging foliar wheat disease.

To aid in that decision making, Septoria Watch will be providing in-season reports around the key timings giving details of the level of septoria being observed in untreated varieties at various Agrovista trials sites.

To read those reports, go to www.fwi.co.uk/septoriawatch

“In China, we are finding much greater genetic diversity. But we don’t yet know whether these findings are related to the recent discovery that barberry can be a sexual host for yellow rust.”

The discovery of a sexual host means there is greater potential than previously known for the yellow rust fungus to develop new races, he explains.

“The risks of emergence of new races increases as epidemics get more and more severe. In some areas of the world, farmers may be forced to stop growing wheat for some years to reduce the pressure from the disease.”

A new race in continental Europe seems to break traditional cereal host barriers, Dr Hovmoller adds. A triticale race in Denmark has been found to grow on susceptible varieties of wheat, barley and rye, as well as triticale.

Fortunately, European wheat varieties are mostly resistant currently, he notes. Which is just as well as the race has changed yellow rust from being a manageable disease on triticale to one that is unmanageable unless sprayed very early and frequently.

In 2009 trials, untreated susceptible varieties of triticale yielded only 0.5t/ha, while resistant varieties in the same field could manage 9.5t/ha.

“It is not a conventional breakdown in resistance. It’s a breakdown of previous, acceptable levels of susceptibility in several varieties at the same time.”


Rust Watch 2011: Submit an entry for the chance to win an iPad*

Farmers Weekly‘s online Rust Watch initiative, in association with BASF, NIAB TAG and, this year, Agrovista, returns for a second year to provide growers and agronomists with an early warning tool for yellow and brown rust outbreaks.

As with last season, a very cold winter spell may have delayed any brown rust epidemic, but a first sighting of yellow rust has already been reported in Essex.

That was on Humber, a variety with a yellow rust resistance rating of eight, suggesting the Claire race of yellow rust that has been identified in breeding programmes in the UK could be a threat to this season’s crops.

On top of that, most growers have continued with a varietal mix based around Oakley or Solstice, both susceptible to the dominant strain of yellow rust found in the UK last year.

So early season monitoring of all varieties should be a priority for growers as timing is the most important factor for getting good control of rusts.

That was shown in Danish trials conducted for BASF, where delaying fungicide treatment until yellow rust was established reduced yields by nearly 1t/ha compared with a well-timed treatment.

Indeed, in the trials, treating with a 75% dose of Brutus (epoxiconazole + metconazole) at the delayed timing wasn’t as effective as treating with a quarter dose at the earlier timing.

Timing is, therefore, critical, and can be guided by keeping an eye on whether any outbreaks of either rust disease have occurred.

To do that, the Rust Watch service needs your help. In addition to regular monitoring of varieties at 12 Agrovista, NIAB TAG and BASF trials sites around the country for yellow and brown rust sightings, we need growers and agronomists to report rust outbreaks in their own crops.

Simply click here and fill in the simple form with your region, variety and rust severity.

This season, BASF is providing two incentives for growers to help us with the monitoring. The first 50 growers to send an update to the Rust Watch charts this spring will go into a prize draw to win an iPad*, while a second draw for another iPad will be made at the end of the season for all users of the site.