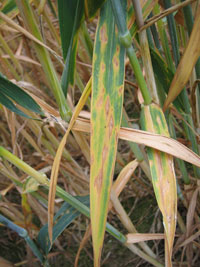 Scottish Agricultural College is investigating a number of reports of Tan Spot in wheat and barley trial plots this summer.


Caused by the fungus Pyrenophora tritici-repentis, the unusual spots have occurred in the Lothians. While this disease is a common problem in Denmark and France it has not been recognised as a major threat to Scottish wheat crops until now.

It is easy to confuse the symptoms with other leaf spot diseases, including Septoria nodorum. However, according to Simon Oxley, senior researcher at SAC, the tan lesions with dark centre and yellow surrounds are all characteristic of this disease.

“We have experienced a cold winter and a warmer than average summer, with plenty of showers” he says. “These weather conditions mirror those typical in Denmark, where, since 2000, the disease has become a common problem. There it is linked to minimum tillage, cultivation systems with continuous wheat or short rotations”.

According to Dr Oxley similar leaf spot symptoms are being investigated in Scottish spring barley.

“We know that Tan Spot can attack both wheat and barley, but further investigation of the barley leaf spots is being done. Septoria nodorum, can cause similar symptoms, and it is more common than is generally recognised in barley during warm and wet summers”.

SAC researchers noticed the new arrival during routine checks of field trial sites. While most farmers attention is returning to the immediate harvest the SAC research into disease patterns and behaviour means the crops are still under detailed scrutiny. Any farmers who do notice unusual spots on their standing crops are advised to send them into the SAC Crop Clinic for diagnosis.

“It’s too late now for any treatment ” says Dr Oxley, ” however it will help us get an idea of the level of disease in Scotland this year. On our trial sites we have spore catchers and weather recorders so we relate this data to any symptoms. It will help inform any advice we might give next season. This certainly proves the worth of our surveillance work”.