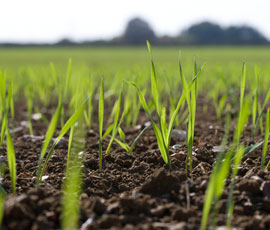 More than half of all growers and agronomists who found saddle gall midge in their crops last year saw a subsequent drop in yields, according to a new survey.

Out of the 140 respondents, 70% had seen signs of the insect and 42% had seen the characteristic galls in wheat stems.

The national survey was carried out by a consortium including Dow AgroSciences, ADAS, NIAB TAG, AICC and the HGCA.

Crops that are most vulnerable to attack are those at early growth stages when the larvae are feeding. For most growers this will be late-sown winter wheat and barley and spring sown cereal crops. Growers on heavy soil types might also be more susceptible.

Previously midge damage had been reported in wheat crops in the Fens in 2004. Midges also caused yield damage in Buckinghamshire, Hampshire and Oxfordshire in 2010/2011.

“It’s the random nature of its appearance that makes it hard to predict and control,” says Will Corrigan of Dow Agrosciences.

This is why, he adds, that recording and collecting data of outbreaks is so important.

The saddle gall midge is a red in colour and about 5mm long, and very similar to the orange wheat blossom midge. Larvae emerge from soils in April and June.

After pupation the midges then lay eggs on the leaves of cereal plants, the eggs hatch and the larvae move down the plant where they feed on the stem, forming telltale galls. Eventually this restricts the movement of nutrients to the ear and causing lodging.

Controlling the midge is not a simple process as there is no specific chemical control, though some pesticides applied at the early larvae stage can be effective.

“The best thing growers suffering from the midge can do is to alter their rotation, including sugar beet or oil seed rape,” he says.

More information can be found on the saddle gall midge in the new updated HGCA information sheet at www.hgca.com