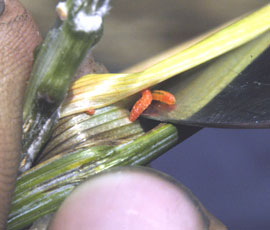 The current warm weather is being blamed for outbreaks of saddle gall midge affecting some crops of continuous wheat for the second year running.

High numbers of the midge (Haplodiplosis marginata) have been infesting crops in Buckinghamshire, Warwickshire and Worcestershire, with crops of continuous wheat being worst hit. But some other cereals crops, including spring oats, have also been affected.

The cold winter and its effect on the midge’s usual predators and the warm spring weather is believed to be behind the current population explosions, says ADAS entomologist Mike Lole.

“We have had adults lay eggs in mid-April, which may be due to the weather. It’s normally mid-May and June,” he confirms.

Lawrence Hicks, marketing director of UAP, says larvae have started to pupate and move to the soil surface at sites of continuous wheat in Buckinghamshire that were heavily infested last July. “There are about six to 10 midge larvae in a 10cm sq area, which is an astonishing quantity per hectare.”

The midge affects crops in two ways, first, nutrients that would normally go to the ear are diverted into feeding the larvae. Second, the galls weaken the stems, which can break at weakened points, causing lodging.

No approved products exist for saddle gall midge, but insecticides such as pyrethroids, thiacloprid – and in particular chlorpyrifos – may be effective, Mr Lole says.