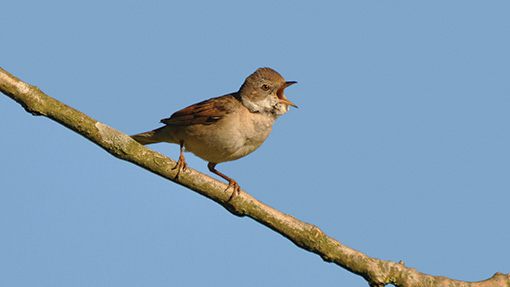 This bird is a member of the warbler family and is about the size of a great tit. The male bird has a grey head, brown back, buff breast and brilliantly white throat, from which it gets its name. It also has quite a long tail, which it flicks and cocks as it darts around among the undergrowth.

Population and status: It is a summer visitor to our shores, arriving in April, and can be found everywhere except urban and mountainous areas. The Whitethroat population crashed by about 70% between the 1968 and 1969 owing to a severe drought in its wintering grounds in the western Sahel (a region of savannah south of the Sahara). Since then their numbers have been slowly recovering.

Habitat: Whitethroats like open farmland in particular, favouring shorter hedges of a couple of metres or so in height, sometimes choosing patches of low scrub or bramble. It is a bird that is rarely still, constantly darting around amongst cover, emerging occasionally to sing its rather short, scratchy song. To make sure it is noticed by other whitethroats, the male will often fly vertically up into air, singing, only to drop straight back down to the hedge once more.

Its deep, cup-shaped nest is made of grass and roots and is built by the male bird. The female then lines the nest with hair and wool and usually lays between four and seven eggs. The nest is positioned low down amongst tussocky grass and the scrubby edge of the hedge.

Management tips: Retain some lower hedges across the farm. Interestingly, lesser whitethroats, a close cousin, prefer taller, wider hedges, so a range of hedge heights across the farm is ideal and will also help deliver a more attractive landscape.

Try to maintain a grass edge alongside hedges and do not cut all these grass strips each winter, as whitethroat (and pheasant, partridge and yellowhammer) much prefer last year’s old, dead grass to nest in.

Whitethroat feed their young on insects, as do most farmland birds, so try to ensure you have a scattering of insect-rich habitats around the farm, such as flower-rich areas, pollen and nectar mixes and even second-year game cover/wild bird mixes, which both attract masses of insects for the whitethroat’s young to feed on.

Peter Thompson is the farmland biodiversity adviser at the Game and Wildlife Conservation Trust. For more information, contact the GWCT on 01425 651 060.