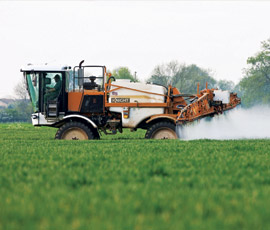 Scientists have dismissed suggestions that glyphosate could be unsafe after a report claimed traces of the weed killer is commonly found in humans.

The study, published by Friend of the Earth (FoE) and GM Freeze on Thursday (13 June), said traces of glyphosate have been found in people in 18 countries across Europe, including the UK.

Urine tests of 182 volunteers in 18 European countries found that on average 44% of samples contained traces of glyphosate. Of the 10 samples taken in the UK, seven had weed killer traces.

This is the first time monitoring has been carried out across Europe for the presence of the weed killer in humans. All the volunteers who gave samples live in cities and none had handled or used glyphosate products in the run up to the tests.

However, UK scientists who reviewed the study said its findings were “unreliable”.

Alison Haughton, head of the pollination ecology group at Rothamsted Research, said: “This is not good science – I cannot find where the methodology and results are published, and so it is impossible to assess the robustness of the work.

“If FoE and GM Freeze want their work to have scientific credibility, and provide a genuine contribution to the debate on pesticide residues, then they should submit their work for publication in a peer-reviewed journal.

“As it stands, this press release is completely insubstantial, it is not scientific, and cannot be taken seriously by anyone.”

Tom Sanders, head of the nutritional sciences research division at King’s College, London, said: “Most samples were below the level of detection and the highest value found was less than 2 micrograms (a millionth of a gram) per litre.

“As most people excrete about 2.5 litres a day it would indicate the maximum intake was 5 micrograms, which is unlikely to be of any significance to health because it is 300 times lower than the level which might cause concern – even in the most vulnerable groups.”

Glyphosate is one of the most widely-used weed killers in the world, used by farmers, local government and gardeners, as well as sprayed extensively on some GM crops which are then imported into Europe for use as animal feed.

US biotech giant Monsanto, the biggest producer of glyphosate, which sells it under the brand name Roundup, said 40 years of independent health assessments by public authorities in Europe and across the world had consistently shown it “did not pose any unacceptable risk to human health or the environment”.

A spokesman for Monsanto said: “Based on the information available to us this study reflects the results of analysing 182 urine samples from 18 countries. There is no information on how these samples were taken and no detail on possible dietary or operator exposure of the people from whom these samples were taken. We always take any allegation seriously and would like to know more.

He added: “It is not surprising to find glyphosate in urine should a person ingest food with low residues of glyphosate. Glyphosate is not metabolised by the human body but excreted into the urine and faeces. This is a well-known aspect of glyphosate that contributes to its comprehensive safety assessment.”