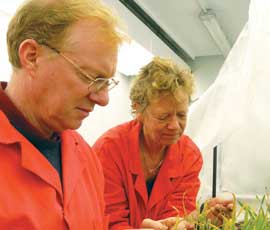 Ramularia is becoming widespread in barley and proving difficult to control. So scientists are taking a multi-faceted approach to reducing the disease, as Sarah Henly explains

It’s too early to say precisely how susceptible the barley varieties on last month’s updated HGCA Recommended List are to ramularia. But it is clear that there are huge varietal differences in response to this relatively new disease.

James Brown, of the John Innes Centre, is hopeful that within the timescale of the £910,000 ramularia LINK project, growers will have ramularia resistance ratings that could reach at least seven on the scale, based on current findings.

“There’s considerable variation between current and older varieties of spring barley, and some among the winter types. We now need to improve the consistency of scoring the disease in trials by understanding how ramularia interacts with environmental stress and also other diseases.”

Identifying symptoms can be difficult – lesions can be confused with those produced by net blotch and with physiological leaf spots. The characteristic small, rectangular, reddish-brown leaf spots appear after prolonged periods of summer dampness.

Last season started as low risk following the cold winter and dry spring, but levels shot up during June as long periods of leaf wetness favoured the movement of the fungus within plants.

It is now known that dew formation is more important to ramularia severity than rainfall. It may be worse in Scotland and the South West than in eastern England because leaves stay wet longer in cooler conditions or just because the pathogen hasn’t yet spread to the East, says Prof Brown.

He has no reason to suppose that ramularia won’t cause yield losses in barley in eastern England.

“In SAC trials last season, effective fungicides gave a yield benefit of 1t/ha in Optic with much lower screenings compared with the untreated control. This could be typical in England, too, particularly if milder, wetter winters and wetter springs become more common as is predicted with climate change.” In light of the fact that strobilurins are no longer effective against the pathogen in Europe due to fungicide resistance, and other fungicides offer mixed control (see box for latest recommendations), finding genetic resistance is key to the research.

“All companies with an interest in UK plant breeding are in on the project. If we can identify the genes involved and develop markers for them, they will no doubt feature in new barley varieties,” says Prof Brown.

Other facets of the project’s integrated approach to ramularia control will be useful for managing the disease in the short-term. These include risk forecasting and the value of seed treatments and T2 fungicides.

“SAC scientists are refining their risk assessment model by testing the involvement of seed-borne infection in disease spread. They are also identifying critical periods of leaf wetness for spore dispersal, which for spring barley is the first half of June and for the winter crop is the first half of April.”

Ultimately, the hope is that using clean seed may be an effective way to reduce yield losses from ramularia across the UK as the whole. Treating barley seed stocks by chemical or non-chemical means could reduce the need for fungicides and reduce disease spread into new regions. This will prevent further losses and could extend the useful life of current fungicides.

• Catch up with previous articles from Our Research into Focus series by visiting our dedicated website at www.fwi.co.uk/researchinfocus

Triazoles, such as prothioconazole and epoxiconazole, applied at the boot stage before symptoms appear, provide effective control and protect upper leaves. Using a triazole in a mix with boscalid, isopyrazam, bixafen or chlorothalonil achieves the best outcome. Strobilurins are no longer effective due to fungicide resistance.

Data from 2010 SAC trials showed the new generation SDHI fungicides gave good protection when applied at booting. Bixafen with prothioconazole gave the best control at normal and half recommended rates.

Further information on control available on the HGCA website

It is pleasing to see the project bringing together all the elements necessary for an integrated approach to control, namely genetics and plant breeding, risk forecasting, and both chemical and non-chemical control.