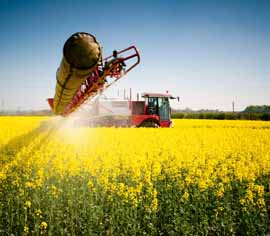 Cold, dry springs for the past two years have kept sclerotinia levels low, with just 6% of oilseed rape crops infected in both 2009 and 2010, reports Peter Gladders of ADAS.

Sclerotia germination, which typically takes place in March and April, is lower by as much as 40% in such conditions, he explains, as both soil temperature and moisture have a role in the process.

“If it’s cold and dry for a long time in the spring, germination is restricted. And that’s exactly what happened last year.”

However, every season is different, he warns. “Crops are a bit more advanced than they were this time last year, so flowering will be earlier. That means the risk of infection is likely to come before the end of April in 2011.”

Currently, soil temperatures are too low for any activity, he reports. “They’re still at 5C. Germination doesn’t take place until they reach 10C. Added to that, soils are drying on the surface.”

Keeping track of what’s happening is important for two reasons, Dr Gladders says. “Yields of 5t/ha are possible with the latest varieties, so maintaining protection up to the end of flowering is a sensible approach.

“We also know that the worst infections come in years when there are repeated infection events. Having the latest information allows sprays to be timed accordingly.”

Last year’s infection pressure arrived in early June, he recalls. “So crops that had finished flowering by the end of May were fine. But those still flowering into June were the ones that got infected.”

Growers must remember that fungicides run out of steam three weeks after application, he says. “That’s why it’s often necessary to have a programmed approach, which takes account of germination and the crop’s development. Two-spray programmes have given the best results, with the first application often delivering growth regulation too.”

Dr Gladders also says that growers operating a one-in-three rotation should be aware that 2007 and 2008 were bad sclerotinia years.

“The sclerotia load under current crops could be high. The individual field is an important component in determining risk, so think back to any previous problems.”

Petal testing will also be used for sclerotinia forecasting this year, he adds, as even when germination is low, there can be high levels of petal infection.

“If germination coincides with flowering, regardless of the numbers produced, there’s a risk to the crop. So petal testing will tell us if disease activity is present.”

His final comment is that it can’t be too dry for sclerotinia. “Although soil surface moisture is required for germination, they still produce spores in dry conditions – just fewer of them. So don’t dismiss the threat of sclerotinia if we have another dry spring.

TAKE PART IN SCLEROTINIA WATCH AND WIN AN IPOD TOUCH

 Sclerotinia Watch, in association with BASF, Agrovista and ADAS, returns this week for a second season. The oilseed rape disease, which can cause on average 50% yield loss in every stem infected, requires certain conditions to infect successfully.

Soil temperature and crop growth stage are two of the key ones. The fungus that causes sclerotinia, Sclerotinia sclerotiorum, survives in the soil by means of resting bodies called sclerotia. When conditions are right these germinate to produce fruiting bodies, which in turn produce air-borne spores that will infect oilseed rape plants.

But few sclerotia germinate before soil temperatures reach 10C, which effectively acts as the threshold for active germination, assuming there is adequate soil moisture.

The main infection route is via fallen petals that provide nutrients for sclerotinia spores to be able to infect the plant. Growth stages track the progress of flowering and petals fall in large numbers at and beyond the mid-flowering stage.

Because all sclerotinia fungicides have very little curative activity, they must be used as protectants, and therefore, need to be on before mid-flowering.

Those two factors are why we are monitoring soil temperatures and growth stage in Sclerotinia Watch. Agrovista will be monitoring its trial sites around the country, and putting the latest information on its FWiSpace blog at www.fwi.co.uk/sclerotiniawatch, while ADAS plant pathologist Peter Gladders will also be writing on the blog and giving his expert opinion on sclerotinia risk from the information he is collating.

Anyone submitting an entry will have the chance to win one of two iPod Touches; one will be drawn from the first 50 entries and the other from all entries this season.