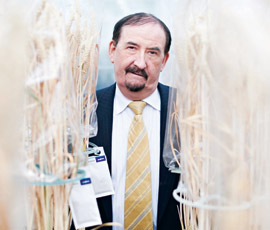 The world faces an extra two billion mouths to feed by 2050 while farmers are faced by tighter rules on pesticide use, so could GM be the answer. David Jones talks to one of technology’s foremost proponents in Britain

Maurice Moloney is hopeful that the world’s first genetically modified crop to repel aphid pests will get the green light for a final trial year, offering the prize of growing wheat with fewer pesticides.

The ground-breaking technology needs government approval for a third year at the world’s oldest research station, and an answer is expected later this month or in July.

Professor Moloney, the head of Rothamsted Research, says it is a very uncontentious application for scientists and he sees no reason the eco-friendly wheat should not be given the okay.

“We are hopeful of getting approval, but we are respectful of the process,” he tells the Farmers Weekly.

The field trial is one of several “second generation” GM crops, which offers real benefits to the consumer rather than earlier moves, which appeared to help just the farming industry.

The 170-year old research station is currently growing its second year of aphid-repelling GM spring wheat and is applying to grow an autumn-sown one, similar to most wheat grow in Britain.

The GM wheat contains an added synthetic gene, copied from the peppermint plant, that gives off a pheromone which aphids naturally release to warn one another of imminent danger.

The pheromone released by the GM wheat is undetectable to the human nose but will hopefully deter aphids which suck energy from the wheat crop as well as spread harmful plant viruses.

An added advantage is that this aphid “fear” pheromone, farnesene, has the opposite effect on beneficial insects such as ladybirds and parasitic wasps, which are attracted by the smell and feed on the aphids.

Prof Moloney believes the benefits to the consumer through less use of pesticides is key to the possible success of this new wave of GM technology.

“The second generation of GM crops are searching for quality traits to make a food product that is beneficial for the consumer,” he says.

The first commercial GM crops, which were developed in the 1990s were herbicide-tolerant crops, such as Roundup Ready soya beans, where the consumer did not see any benefit.

Prof Moloney believes this new approach will give consumers concrete benefit such as an environmental gain or a boost to the nutrition value of wheat.

The team at Rothamsted in Harpenden, Hertfordshire, are tight-lipped about the results of the aphid-resistant wheat, with £1.28m funding by the British government, which did bring anti-GM protestors on to the site last summer.

They are focusing on wheat as it accounts for one fifth of human calories consumed and is a big £1.2bn crop in Britain where pests, such as aphids, can cause £120m of damage a year.

Scientists identified that the aphid-repelling odour was produced by plants, such as peppermint and wild goat grass, as a natural defence mechanism and attracted the traditional enemies of aphids.

To transfer the repelling odour ability of mint to wheat required GM technology as they were looking to transfer genes between species that do not normally undergo sexual crossing.

They copied the gene and manipulated it to give off higher levels of the odour to trick aphids into keeping their distance rather than killing them as pesticide would do.

Prof Moloney had previously helped develop the first transgenic herbicide-tolerant oilseed rape plants in Canada, so brought that experience with him when he moved to Rothamsted in April 2010.

Scientists used the wheat variety Cadenza, which can be grown as a spring or autumn-sown crop, and a spring crop was successfully harvested last year and another is being repeated this year.

Rothamsted is now looking for permission to plant an autumn-sown crop later this year to assess autumn infestations of aphids in wheat crops.

The application to DEFRA secretary Owen Paterson in March is currently being assessed by the independent Advisory Committee of Releases to the Environment during a consultation period.

Prof Moloney says the intention will be to sow the crop in September or October, assess aphid damage and then harvest the crop in May, or well before flowering.

He argues GM has traditionally been associated with killing something, either weeds or insects, but this approach is very different as it aims at deterring aphids and encourage aphid preditors.

The technique worked really well in the laboratory, in fact “better than our wildest dreams” according to scientists in the Rothamsted team.

If this aphid-resistant wheat was ever sold to growers it could avoid the use of some pesticides at a time when there is great concern over loss of other creatures like honey bees and bumblebees.

Although wheat crops are not particularly attractive to bees, the European Commission’s two-year ban on the use of some neonicotinoids in crops attractive to bees such as oilseed rape has highlighted the problem.

Currently, a large proportion of the UK wheat crop is sprayed with broad spectrum insecticides to control cereal aphids, but repeated use of these pesticides can lead to resistant aphids and kill non-target species.

Hence Prof Moloney’s eagerness to see if the aphid-repellent technology can work in the field and whether it is a robust enough technology for the future.

Further down the Rothamsted GM pipeline is work that hopes to make wheat more nutritionally beneficial to the consumer by introducing complex carbohydrates.

With the fibre intake by British adults falling far short of dietary advice, this work could have a direct health benefit by increasing roughage in the diet.

It could also have a metabolic effect by releasing nutrients in the bloodstream in a more steady way to not put undue pressure on the pancreas.

Cutting back on big sudden doses of blood glucose and insulin to the pancreas may lead to the reduction of diabetes, one of the developed world’s fastest growing medical problems.

“We’ve got genetic lines of wheat with these qualities, so we need to see if we can still get the breadmaking qualities with these higher nutritional benefits,” he says.

Prof Moloney says Rothamsted will have to rely on GM technology to get to its target of 20t/ha of winter wheat by 2032, under its 20:20 programme.

“We will need some type of GM to get to the target, we would never get there in 20 years without it,” he says.

Scientists are looking at maize crops which are twice as efficient at photosynthesis as wheat and also at how to increase the rooting ability of the crops to tap water supplies.

“We will need some kind of moon landing technology to get there,” he says.

He believes that it is possible to get to this target when looking at how US corn yields have risen using GM, while British wheat yields have tended to plateau since the 1980s.

A jump in yield of nearly 40% will be needed over the 20 years to reach the target and Prof Moloney says the advance would only be 15% using convention breeding technology.

With the world population set to rise to about nine billion by 2050 from the current seven billion he says that scientists need the new technology to keep up.

“Within 20 years if we have not solved the problem of higher productivity, there will be a world food crises,” he says.

The research station was founded in 1843, about the time Gregor Mendel was experimenting with pea plants in his Austrian monastery and became regarded as the “father of modern genetics”.

Rothamsted is looking to try and meet the need to increase world food production by 70% by 2050 and do this on less land using less water with fewer pesticides and fertilisers while ensuring a sustainable agricultural system.