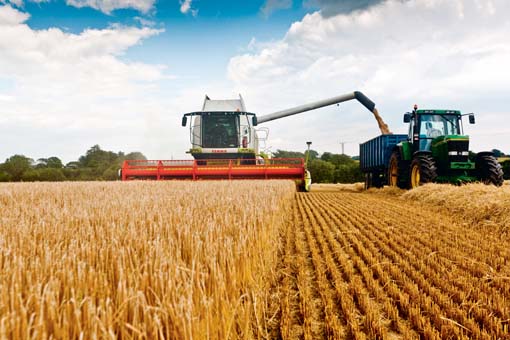 The trend towards dry springs has made malting barley growing more of a challenge, but a Hampshire grower’s approach resulted in a 8.3t/ha crop with a gross margin of nearly £1,400/ha despite 2011 being one of the driest growing seasons.

A wet February meant Stephen Horn couldn’t drill the barley crop until the first week of March at Bushey Down, Manor and Hazleholt Farms near Droxford in Hampshire. Apart from a day in mid-March and another in early May, it didn’t receive any rain until the middle of June.

However, the 140ha crop on the farm’s mainly chalk with flint ground delivered yields well above the five-year average at up to 8.9t/ha, with no late tillers, nitrogen securely below the 1.65% target and zero screenings over a 2mm sieve.

Grown on contract for Robin Appel, the combination of Quench and Propino delivered a gross margin just shy of £1,350/ha.

He puts his success down to his combination of early winter preparation, well-managed seed-beds, and timely nutrient and fungicide applications. This achievement was the reason for being crowned the England and Wales Malting Barley Grower of the Year by the Malting Association of Great Britain.

“After an application of Roundup to tackle weeds and volunteers, we set up all the barley ground in early November with the 11-leg Sublift cultivator that has almost completely replaced our plough,” explains Mr Horn.

“This allows us to get on the ground as early as we can in the spring to tackle any late emerging weeds, spin on the fertiliser and work-up nice fine, firm seed-beds with the Vaderstad Carrier ahead of our System Disc drill.

“We leave the seed-beds to settle for a day or two before sowing as we find this gives far smoother and more even drilling. We also drill all our headlands last, pulling them up with a Terradisc after we’ve sown the main field and leaving them for 48 hours, if necessary, to get rid of any compaction and wheeling damage.”

A total of 40kg/ha of N is routinely applied to the seed-bed, in a compound with extra potash, magnesium and sulphur, to aid establishment. This is in addition to variable P and K applications every year which maintain 2+ indexes consistently across all the fields.

Last season a further 70kg/ha of ammonium nitrate went onto the crop in early April as soon as the tramlines could be seen, with a final 34 kg/ha applied just pre-tillering in mid-April; a “little, often and always early” strategy which supplies N when the crop can best use it while minimising late season uptake risk.

“These supporting sprays really help keep the crop going in dry springs. Especially since they and the fungicide applications – strobilurins at late tillering and 3-4 weeks afterwards – go on precisely when they are needed rather than with the next scheduled spray. “Based on needs and conditions, the spring barley was sprayed fully five times last year. This meant no compromise whatsoever on timing and far less tank-mix complication and risk. Since both the kit and labour were there, there was little effective extra cost either.

“Doing the job right is what really counts with spring barley,” he stresses. “The short growing season means little opportunity for compensation if anything goes wrong. And there’s far more to lose from failing the specification in the malting market than there is with milling wheat.”

Priority is given to spring barley at harvest with a hybrid Lexion 570 and 40t/hour Svegma continuous flow drier enabling combining at 21% moisture, if necessary.

The drier forms part of a 5,500t grain processing and storage complex at Bushey Down Farm, costing more than £0.5m in 2008.

This has recently been fitted with a high tech Lishman Barn Owl wireless system which automatically monitors grain temperature from probes throughout the store, controlling both pedestal and roof fans to reliably maintain optimum storage conditions.

“The facilities were a huge investment at the time,” says Mr Horn. “But they are critical in allowing us to preserve the quality grain we grow so we can take advantage of market opportunities.”