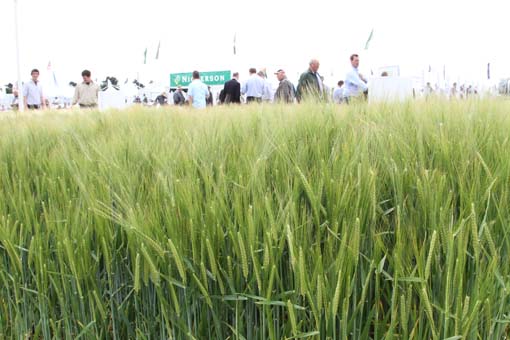 Hundreds of cereals, oilseed and root crop varieties will be on show at this year’s Cereals event, including the latest additions to the various Recommended Lists vying for a place in growers’ drills this coming autumn.

There’s no better place than the crop plots at Cereals 2011 for farmers to scrutinise potential candidates for their arable acres – whether they are looking for varieties that make a better match for their markets or for improved agronomic traits to suit their farm.

“Many of the visitors will be seeking expert advice on what should be filling their drills over next season and beyond,” says event director Jon Day. “With so much knowledge on tap, Cereals 2011 is the best place to find the answers they need.”

The HGCA stand will be a key draw, with 127 combinable crop varieties available for inspection. Plots include varieties already on the Recommended Lists and candidates vying for a place next November.

On the wheat tours, Simon Oxley and Bill Handley will give details of field performance, with a representative of the UK milling industry describing the suitability of each variety. On the barley tours, Peter Hanson and a UK malting industry representative will summarise the current crop of winter and spring barley varieties.

Syngenta is displaying a range of new varieties. Oilseed rapes NK Grandia, Tactic and Boheme will provide a starting point, while the outlook for high-yielding bread-making wheat Gallant will be examined as it grows in popularity among millers and bakers.

Better known for its OSR portfolio, breeder DSV is launching its first winter wheat to UK farmers at Cereals 2011. Chilton, an Option/Solstice cross undergoing National Listing, is a high performance Group 2, with high Hagberg and specific weight. Suitable for ukp (export breadmaking), the variety also performs well as a second wheat, thanks to an eyespot rating of nine, says DSV.

The main focus on the KWS stand is likely to be barnfiller KWS Santiago, which leads the Recommended List on yield at 108% of controls. Two new high-quality wheats will be introduced – KWS Podium looks to have top end Group 2 quality and KWS Target is a true Group 3.

Collaborative work to develop oat varieties that meet the demands of end users and growers will be showcased on the Just Oats section of Senova’s stand.

Dekalb will be presenting three complementary new high-performance hybrid oilseed rape varieties from its market-leading pipeline at the event. Recommended List candidate DK ExPower is being widely tested in commercial production this season. Like that variety, other newcomers DK Excellium and continental list-topping DK ExStorm are both high-oil varieties carrying the RLM7 phoma resistance gene and featuring strong agronomic packages for performance consistency.