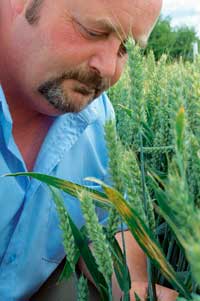 Seed treatments could be a valuable first line of defence against yellow rust next year, but not as a replacement for a well-timed four-spray programme, according to advisers.

The case for an added-value seed treatment on wheat varieties which are susceptible to yellow rust is clear, believes variety consultant Mike Jeffes.


“Look on the seed treatment as a management tool,” he says. “It helps to break the green bridge, clears out any rust lurking in the crop until early spring and gives you some flexibility to get the T0 spray on.”

Furthermore, the fluquinconazole-based treatments also help to strengthen the straw, bringing lodging benefits, and often giving a yield increase of 3-4%, even in the absence of disease, he states.

“Their use should be routine on susceptible varieties. They delay the start of an epidemic and, most importantly, give you breathing space.”

The breathing space applies to the timing of the T0 spray, which Mr Jeffes stresses is still required. “A seed treatment isn’t a substitute for the T0. It will still be important to get the foliar sprays on, as you need to be able to keep ahead of the disease.

“But if the weather delays spraying or you just can’t get round the crop as quickly as you would like, then you have some room for manoeuvre.”

Mark Hemmant (pictured above) of Agrovista agrees with Mr Jeffes and has trial results to support their view.

Work done for the last five years by Agrovista has looked at the role of Epona (fluquinconazole + prochloraz) in a yellow rust situation – comparing its efficacy to a single purpose dressing and in programmes with and without a T0.

“Last year, when yellow rust came in early, we saw clear differences in Robigus,” he says. “Not only was there a yield benefit of using Epona over Beret Gold at all times, there was also an advantage of using Epona ahead of a well-timed spray programme.”

Although the yield benefit from Epona was just 0.02t/ha where it was used in conjunction with a four-spray programme, Mr Hemmant advises growers not to get too hung up on the extra yield.

“The real value from products such as Epona is the extra time that they buy,” he notes. “Growers who want to continue with Oakley, or have fields that are spread out over a considerable area, will find this very useful.”

The new virulent yellow rust race that has hit Oakley so hard, as well as affecting other popular varieties, means that it will be very difficult not to have a rust susceptible variety in the ground this autumn, he warns.

“In our first wheat trial, 18 of the 21 varieties have got yellow rust in some way,” he reports. “So growers will have to look for solutions to the disease. You can’t avoid it completely.”

To get a seed treatment with some foliar disease activity, there’s a choice between Epona or Galmano Silver for first wheats, while for second wheats there’s Jockey or Galmano Plus, which both offer take-all reduction as well.

The treatment previously known as Baytan, now sold as Tripod, also has activity on yellow rust, although it can delay crop emergence.

The fluquinconazole products do the job better and are an improvement on the old Baytan range, agree both Mr Hemmant and Mr Jeffes.

Put another way, the cost of an added-value seed treatment is £8-10/ha at low seed rates.

“We know there’s going to be more yellow rust inoculum around this autumn, and there are going to be varieties with lower resistance ratings. It will be important to keep infection out of crops right from the start – which is what this type of seed treatment can do.”

Other options open to growers include the planting of safe varieties, wherever possible, and the strategic placing of crops on the farm, points out Mr Hemmant.

“Testing is still going on, but we do know that there are some varieties which are unaffected by the new yellow rust race. Of course, that doesn’t mean to say that they don’t have either septoria or brown rust issues.”