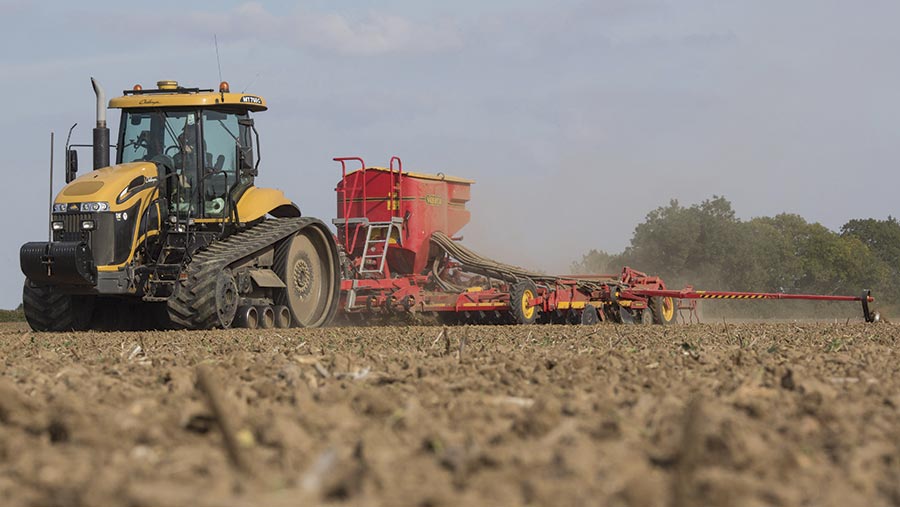 The challenges of blackgrass and flea beetle are affecting cropping decisions for next season, as growers look to survive another season of low grain and oilseed prices.

In gross margin terms, the pecking order has changed slightly this year, according to George Badger, farming consultant and agronomist at Strutt & Parker.

Last year, feed wheat came out on top, but Group 1 milling wheat has surpassed it this year with a gross margin of £747/ha, while Group 3 sits £38/ha behind followed by feed wheat.

Oilseed rape comes below the wheats, while winter beans have the lowest gross margin, and hybrid barley sits in between (see table on p48).

Graham Redman, partner at the Andersons Centre and author of the John Nix Pocketbook, says that in the past five years pulses have topped the gross margin table in one year, while oilseed rape was on top for two years, as the markets were particularly strong.

However, in the long term, wheat will remain the highest-grossing crop, he says. “But it is always worth growing break crops, as there are opportunities to market these.”

Despite slightly more appealing gross margins than last year, one of the key things to consider when planning what to plant this autumn is blackgrass control following a high seed return year, says Mr Badger.

“Rotations on most farms are focusing on blackgrass as this has been the worst year for controlling it in three or four years. The emphasis is now on cultural control and selecting a variety that suits late drilling with a good yield.”

He suggests that farmers should implement rotational ploughing, delayed drilling and spring cropping to try to manage blackgrass.

If they delay drilling wheat until 20 October, farmers will need to increase the seed rate to compensate for the high stack of pre-emergence herbicides. “After mid-October, up the seed rate to more than 400 seeds/sq m,” he advises.

Mr Redman suggests the first thing to bear in mind is that it could be up to two years before these crops are sold.

“Look at the five-year averages [for both prices and yields] when considering forthcoming crops. Though yields will vary from farm to farm, there should be some evidence of what to expect.”

Wheat is the most viable crop to plant for 2017, with the focus on Group 1 milling wheats, says Mr Badger.

“For later planted crops, varieties need to be vigorous and have a robust disease profile. We [Strutt & Parker] are recommending Skyfall for Group 1, Siskin for Group 2, Basset for Group 3 and Evolution for Group 4.”

However, the milling wheat area has been on the increase for several years, rising by 26% in the past two years alone, according to Mr Redman.

“Some millers are not keen on certain varieties, so farmers need to be aware of what local consumers want.”

The wheat carryover this year will be fairly high, but Mr Redman says this is something we have experienced before.

“At this stage, if it is good enough to plant now, consider if it is time to some sell forward. However, chances are, prices will be higher in two years, so if you do sell, do not sell much.”

Farmers will try to maximise the area of first wheats planted, but Mr Redman recommends they calculate the worth of growing second wheats.

“It could be that second wheats have as good a gross margin as other break crops.”

“However, a lot of growers still have flea beetle issues so there may be a reduced area planted. It is worth drilling as early as possible to allow the plants to grow away from flea beetle pressures.”

There is the alternative of growing high erucic acid rape (Hear), but the issue can be getting a contract for it. “Stocks have been high and with the higher seed costs it means it is a bigger risk,” explains Mr Badger. “It is a similar situation for high oleic, low linolenic (Holl) varieties, so more farmers are going back to growing conventional OSR.”

Winter linseed is another option and looks favourable on paper, he adds.

“However, reliable yield data is not available and there are issues with blackgrass control compared with oilseed rape due to the absence of propyzamide chemistry.”

Winter barley does not stack up as well as wheat this year, but it is a beneficial crop to enable early oilseed rape entry behind it, explains Mr Badger.

“Though hybrid barley has a higher output than conventional barley, with seed costing £105/ha compared with £60/ha for conventional, it is much pricier. It is also worth remembering that yields will suffer if drilling is delayed for blackgrass.”

Barley carryover this year is also at the highest level for a quarter of a century, warns Mr Redman.

“Lots of farmers have opted for spring barley to manage weeds, so maltsters have plenty of choice. Do not expect premiums to be high this coming year.”

The value of winter beans has remained stable but this also means it has stayed low in terms of gross margins, says Mr Badger.

However, beans are worth considering in terms of their value in the whole rotation, particularly the value they add to a following winter wheat crop.

As well as aiming to maximise yields, it is worth farmers trying to save on variable costs to maintain a higher gross margin when prices are lower, says Mr Badger.

“Urea is priced at £175/t, which works out at 38p/kg of nitrogen, while ammonium nitrate is conservatively estimated at £170/t, giving N a value of 50p/kg,” says Mr Badger.

“This is a big reduction on last year and will sit well with farmers planning to grow milling wheat. Growers should consider using urea for one split where consistent spreading can be achieved because of the 20% saving in cost.”

Mr Badger also suggests that using biosolids (treated sewage sludge) to replace phosphate can be a cheaper alternative than triple super phosphate, while also having the added benefit of increasing the organic matter in soils.

Though the prices of crop protection sprays have not fallen, he says that herbicide costs should not be cut back where blackgrass is a problem.

“However, careful selection of resistant varieties and delayed drilling will reduce disease prevalence and enable fungicide savings,” he adds.

“If farmers do delay wheat drilling until after 20 October, the crop will emerge in November, so consider not dressing it with Deter to save costs and use a post-emergence pyrethroid application for aphid control instead.”

Farm saved seed is another option to consider.