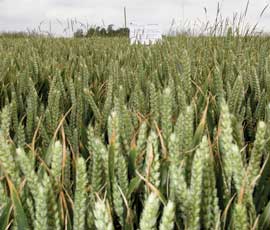 Current cropping practices encourage serious blackgrass infestations and need to be changed before the weed problem gets out of control, warns agronomy adviser Hutchinsons.

Growers have relied on herbicides for many years, but they will need to switch to other methods of control as some herbicides have been banned and resistance rises to many of those still available.

“We need to see a change in attitude from growers urgently, and they need to understand the impact their current strategies are having on blackgrass populations,” says Hutchinsons technical manager Dick Neale.

The advisory group set up its national blackgrass centre of excellence in 2010 near Brampton in Cambridgeshire to highlight those impacts and how to address them.

Now in its third season, the goal to rid the site of blackgrass over its five-year tenure is looking hard to achieve, demonstrating the difficulty growers face.

Mr Neale says that the lessons learned through nearly three full seasons are providing some useful, practical advice on how growers can manage their blackgrass.

“This year we have made some radical changes, some of which have been forced onto us by the weather. It’s been a bad year for the crops, but a great year for learning,” adds Mr Neale (pictured examining a cereal stubble for signs of early blackgrass germination). 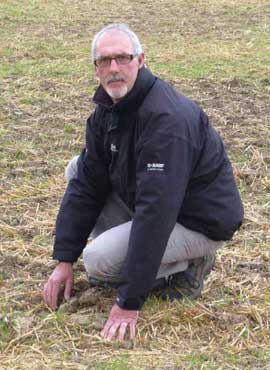 With areas of the site flooded or plagued by slugs after last autumn’s persistent rainfall, some of the winter wheat and oilseed rape failed.

This has enabled Mr Neale and his team to study fallow and stale seedbed management and the implications of spring cropping on a site with a huge blackgrass seed bank.

Cultivation practices are where Mr Neale believes growers need to begin their quest to rein in blackgrass.

“Blackgrass thrives on heavier moisture retentive soils and improving the soil structure down to the sub-soil will be vital for getting blackgrass under control,” he says.

The 100ha site at Brampton has been divided into soil “zones”, with the red zones of heavier soil strongly linked with high levels of blackgrass.

Mr Neale urges growers to do the same, mapping patches and if necessary divide fields so the areas can be managed in a different way.

“If you haven’t got blackgrass there already then it isn’t there at all, so separating the areas out will allow growers to target their efforts where it’s needed,” he says.

In most circumstances, sub-soiling is simply not required and in failed crops and bare soil situations the subsoil is simply too wet.

He points out that deep cultivations can deconstruct soils, and shallow cultivations restricted to the top 50mm of the soil can only have a positive impact.

Results have shown that shallow cultivations to 50mm combined with rolling or raking is a far more effective method of getting blackgrass to germinate early.

The group has teamed up with Cousins to design a cultivator that can maintain a consistent shallow working depth, helping to manage the seed bank within the surface layer.

This allows growers to get the most out stale seedbed glyphosate applications and the most effective chemistry at pre-emergence.

Stale seedbeds and fallows are key to ensure as little blackgrass germinates in the crop as possible and Mr Neale has seen that a little and often strategy is the most effective way to use glyphosate.

In a fallow trial, the allelopathic effect of blackgrass roots exudate was shown to suppress the germination of other weed seeds, including its own.

“It’s important not to let areas of blackgrass build up root exudate in the soil, as it will reduce the efficacy of the stale seedbed or fallow,” he says.

“Taking it out when it is no more than two leaves will keep encouraging further germination, which can be helped by further rolling or raking,” he adds.

The same allelopathy effect has also been noted in what Mr Neale describes as the most viable spring crop options for aiding blackgrass control – spring oats and spring barley.

Even where blackgrass had been given a headstart in spring crop trials, blackgrass was suppressed considerably in the bottom of the oat and barley crops.

“Oats compete fantastically well, but as with many of the spring crop options, chemistry is limited. Spring barley has the attraction of having an approval for flufenacet pre-emergence,” says Mr Neale.

Mr Neale believes a five-year plan should be implemented where blackgrass is out of control, incorporating all the cultural controls at a grower’s disposal.

“Fallow is a good place to start and once you have committed, don’t back out. Blackgrass control must be the priority and it can’t be compromised,” he says.