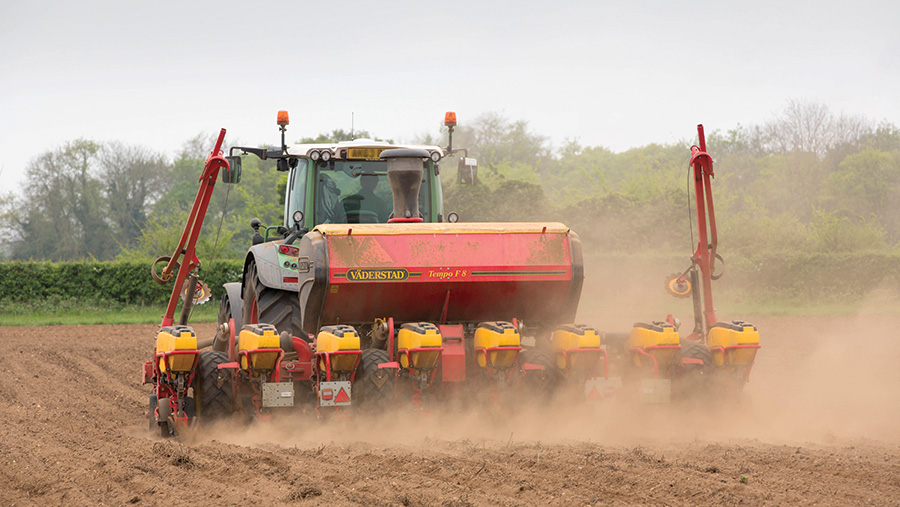 Choosing which maize varieties to grow for biogas can seem baffling with nine maturity groups, lists for favourable and less favourable sites and a separate Niab biogas list.

Moreover, as the past two years show, getting it wrong can result in yield penalties and harvesting late in poorer conditions.

Hutchinsons seeds manager Colin Button points out, if you speak to any experienced maize grower, he will highlight the fact that “we couldn’t have had two more different years.”

Where to go for more information

England saw one of its best seasons in terms of maize crop growth in 2014, with ideal conditions and ample heat units.

In contrast, 2015 was one of the worst years with enough heat units in theory to reach maturity, but arriving at the wrong time.

“We had a late spring which delayed establishment, followed by cool conditions in August and September,” he says.

Looking at the analyses from Hutchinsons’ snapshot trials, 2015 saw the energy produced (MJ/ha of metabolisable energy) being 3.5% down.

“This [difference] sounds small, but it equated to a two month difference in harvest date,” he says.

Some crops in the West were not harvested until late November and harvesting this late will have knock on implications on soil health and structure.

So with this in mind, how do growers mitigate the impact of a similar late season while maximising yields in a good growing season like 2014?

Mr Button says there has for some time been a growing interest in early maturing varieties, and last year’s difficulty will add to this.

He believes there are advantages of opting for ultra-early varieties, harvesting in mid-September onwards rather than from October.

“Growers have been looking at the earlier, high dry matter and starch varieties usually aimed at the livestock world. This is of greater interest this year than ever.”

It is also a trend being seen in Germany, adds Mr Button, highlighting that they are some years ahead in experience of growing large areas for anaerobic digestion.

The earlier harvest means better soil conditions for harvesting, being more likely to be dry and carry more weight. It also gives growers more chance of getting a cover crop established to help reduce the risk of erosion over winter, or a following first wheat crop drilled in good time.

He adds that the environmental impact of bare stubbles, such as soil erosion, is also coming under greater scrutiny.

Of the early varieties that have caught Mr Button’s eye in Hutchinsons’ trials, there is the ultra-early P7326, a new hybrid from Pioneer that demonstrated its ability to lay down starch in a cool season. Other earlies of note are Sergio from KWS and RAGT’s Agiraxx.

However, there is still a case for growing a later maturing variety.

In areas where you can drill early on favourable soils and typically get the heat units in nine out of 10 years, growers can consider going for a mid or later maturing variety to get that extra yield.

Of the late maturing varieties, Movanna from DSV gave good dry matter and starch yields with early vigour and another is Indexx from RAGT, which produced a good number of cobs and matching high fresh weight and dry matter yields.

But these late maturers are only suitable for the best growing scenarios, or where farmers can cope with harvesting in late October or early November, if the season goes against you, says Mr Button.

In the mid maturity group, Pioneer’s P7298 and Autens from KWS both have performed well in trials.

Large-scale growers of maize for anaerobic digestion tend to grow a selection of varieties that give them a spread of harvest dates.

“They can only harvest a certain area in the same day, so they aim for a four to six week spread in harvest dates,” says MGA agronomist Simon Draper.

The specialist biogas varieties tend to be later maturing, so opting for a high-yielding forage variety will offer the earlier cutting dates, he says.

A good option is Ambition from Limagrain, which is ready to harvest about three weeks earlier than a specialist biogas variety. Next is Asgaard, from the same breeder, giving high yields and is ready about two weeks.

However, early drilling does bring risk. It is not frost, the issue is waterlogging and cold soils, which kills off the seed, Mr Draper explains.

“You want a dry seed-bed at drilling with a low risk of waterlogging,” he says.