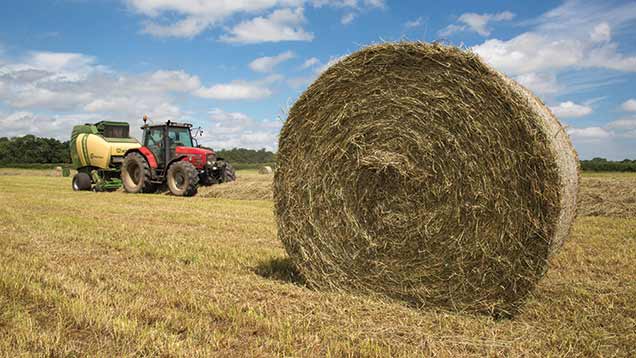 Straw has long been used as a fuel in biomass burners, but in recent years there has been a rapid expansion in commercial power plants using straw.

So, with a number of new plants in the pipeline, could this growth provide a profitable new market for farmers?

Undoubtedly, the answer is yes – with low cereal prices, the extra income from straw sales could make a real difference, taking crops back into the black for some. But it is no panacea and naturally there are some potential drawbacks to consider.

According to the government’s information portal, the Biomass Energy Centre, UK farmers grow nearly 2m hectares of wheat and 1m hectares of barley each year – with straw yields of about 3.5t/ha and 2.75t/ha, respectively. This gives a total UK straw production of more than 10m tonnes/year.

About 5.8m tonnes was used for animal bedding, about 40,000t for mushroom compost, and 80,000t was exported. That left almost 5.7m tonnes that was incorporated back into the soil.

Clearly there is scope for expansion in the market. Which is a good thing, considering the number of plants that are in the pipeline.

So far, the UK has a few straw-fired power stations in operation, including at Selby in Yorkshire, Sleaford in Lincolnshire and Ely in Cambridgeshire, with others either under construction or awaiting planning permission across eastern England.

According to straw pelleting company Pelco, this growth means the UK biomass market for straw could quickly reach 1m tonnes, so it is also in the process of rapid expansion to meet this demand.

“We are looking to put in five pelleting plants across the UK,” says head of communications Michael Gurney.

These will be based in Ely, Selby, Harlow, Daventry and Swindon, and each will process about 155,000t of wheat and rapeseed straw a year, with rail links to the major power plants for efficient transport.

“The UK is a long way behind countries such as Denmark, which has a very mature straw market,” says Will Mitcham of management consultant Wilson Wraight, which is handling straw procurement for Pelco.

“Of the 12m tonnes of straw produced in the UK, about 4m tonnes could be taken off the land without detrimental effect.”

But what is the effect of removing straw from the field, rather than returning it to the soil? According to Mr Stoddart, the main considerations are nutrient value and organic matter.

“You can forget about the nitrogen value of straw – it is lost by the microbial activity required to break it down,” he says.

That leaves phosphate and potash, the content of which was worth about £18/t in straw in 2011 and could be less based on today’s prices. “At that rate, it is still worth selling the straw and buying in the replacement P and K.”

But what about organic matter? “Straw doesn’t break down that easily,” says Mr Stoddart. “If it is all you have then use it, but you are actually better off using any other kind of organic matter for the soil – if you can do a straw-for-muck exchange that would be ideal.”

To increase the organic matter of soil by one point a farmer would have to incorporate 30t/ha for 20 years – so in the scheme of things, 3.5t/ha of straw a year is negligible, he adds.

It is also important to consider the workability of the soil – incorporating straw could benefit heavy soils, but could actually make lighter soils worse, says Mr Stoddart. “You need to look at your individual case – what is right for one isn’t right for all.”

On the flip side, removing straw from the field makes the subsequent cultivations easier and reduces the risk of slug damage to following crops. It can also reduce the carryover of disease and weeds – although of course the potential compaction caused by baling and stacking should be considered.

Depending on the type of straw used, it can also help fulfil the three-crop rule, with triticale classed as a separate crop to wheat and of course oilseed rape, he adds.

“If you sell to a power station, it often has a fleet of balers with low-pressure tyres – the type of kit that most farmers can’t afford to run themselves, and that arguably do less damage,” says Mr Stoddart.

“And a lot of farmers can’t be bothered with the hassle of baling themselves, and like someone to come in, bale it, collect it, and pay for it.”

Storage can be an issue, however, with most farmers storing stacks of bales in their field until collection.

“If you have Hesston bales they are often stacked nine bales high, and you can easily lose the top two and bottom layers, for the sake of a concrete pad and a tarp.”

To tackle this wastage, Pelco is offering to finance the building of straw stores for farmers who can commit at least 200ha of straw a year for the next eight years.

“We want as much straw as possible to come from covered stores. After 16 years and having satisfied the terms of the lease, the barn becomes the landowner’s unencumbered,” says Will Mitcham of Pelco.

To burn efficiently, straw must be as dry as possible, so Pelco operates on a maximum 18% moisture contract.

If farmers are selling straw in the swath – at a price of £20/t in 2016 – it must be 22% moisture or below, and after agreeing it meets this standard, the quality then becomes the responsibility of the contractor, he adds.

Baled straw at 16.5-18% moisture is priced at £40/t ex-farm for the 2016 harvest, with “silver” standard of 15-16.5% moisture receiving a £3/t premium and “gold” standard at below 15% moisture getting a £6/t premium. For those entering into eight-year contracts with Pelco, the contract price is index-linked to CPI.

A common problem that farmers encounter when selling straw in the swath or using contractors to bale it is the timeliness of operations and reliability of payment, adds Mr Mitcham.

“We will only be using reputable contractors, signed up to eight-year contracts, who will be paid on a bonus basis to encourage rapid post-harvest operations.”

Farmers can choose a mixture of baled and swath contracts, on an annual or eight-year basis. Those with an eight-year swath contract will receive an advance payment of £25/ha on 1 August in the year preceding harvest, and get the balance payment within 28 days of delivery to the plant.

Delivery is organised at Pelco’s expense, but while outside stacks should be cleared by 31 December, no interest or storage payment is made for bales stored undercover.

Insurance of the straw also remains the farmer’s responsibility until it is moved – and of course, there is the risk of a wet harvest resulting in default on the contract.

“We have tried very hard to incentivise the parts of the straw chain that have historically been the weakest,” says Mr Mitcham. “Price and supply stability are key – by having eight-year contracts our financial backers, contractors and farmers will have the confidence to invest.”

Of course, there are other contracts available from other suppliers, but one of the main difficulties is the logistics of supply.

With transport costs so high, most generators are only sourcing within about 50-70 miles of the plant, so farmers will need to look at their local market opportunities.

“We may not pay the highest price in the market, but with better storage there should be zero wastage,” adds Mr Mitcham. “We are also not advocating a 100% take-off – we want to work rotationally with farmers and agronomists to complement good farming practice.”

Tristan Squier typically bales 3,000t of straw a year at Doggetts Farm, Roxford, including buying straw in the swath from nearby farms in Essex.

“For the past 10 years we have baled pretty much every acre of wheat straw, although we chop our oilseed rape as it can clash with baling wheat, which is our priority,” he says.

Although selling straw to Ely Power Station provides a useful extra income of about £15/t in the swath for neighbouring farmers or about £45/t for bales from their own land, there are drawbacks.

“We live on the edge of Southend, and during the past two school holidays we have had two stacks set on fire – it is a serious practical consideration,” says Mr Squier.

The farm has limited secure undercover space, so most bales are stacked outside, which means the top bales become rain damaged.

“We used to be able to sell them for mushroom composting, but there’s no UK market for them now, so about one-eighth of the stack is written off. If we farmed near an anaerobic digestion plant or carrot-growing land that would probably help.”

On the plus side, supplying the power station does provide extra income; baling and removing straw before drilling oilseed rape helps to reduce slug damage, and it makes autumn cultivation easier, he adds.

“But I am a bit concerned about our soil organic matter, so I think this year we will concentrate on baling where the land is going into oilseed rape, and leave the rest to cultivate in.”