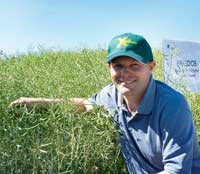 “We’ve done around 100 strip trials comparing semi-dwarf hybrids with taller hybrids in the UK and Germany over the past few years,” said Konrad Kraling, Pioneer’s plant breeding manager. “Every year we’ve seen around a 3% yield advantage for semi-dwarf hybrids over the taller ones.”

That contrasts with around a 10% disadvantage in gross output in HGCA Recommended List trials. But the RL trials couldn’t compare different oilseed rape types easily as they had different growing habits, his colleague UK and Ireland sales manager Andy Stainthorpe (pictured) pointed out. “It is why HGCA has recommended them in a separate category.”

There were plenty of advantages of the semi-dwarf hybrid type, Dr Kraling suggested. Those included less physical damage from the sprayer when applying inputs around flowering, and much easier harvesting because of the lower biomass of the crop.

“Fuel use is much lower at harvest, and combining is much quicker as there is less stem to process,” said Dr Kraling

Ripening of crops was more even too, which also helped harvest speeds and timeliness of harvest. “In semi-dwarves the main stem and the side branches tend to flower all at the same time, unlike taller hybrids. Flowering might start a bit later, but it is more synchronised and faster, and development moves from the side branches to the seed sooner, allowing the stems to dry down more quickly.”

Light, drought-prone soils could be a good place for semi-dwarf hybrids, he noted.

“In Germany, we’ve seen very good yields in sandy soils. The roots on semi-dwarves grow quicker and they produce more side roots, so the area of root is bigger, which is an advantage under drought conditions.”

Lower amounts of residue could mean reduced slug pressure in following crops, Agrovista trials co-ordinator Niall Atkinson suggested. “They could also be useful for growers using non-inversion techniques, where less trash might be easier to drill through.”

But don’t think of semi-dwarf hybrids as low input crops, warned Mr Stainthorpe. “They are actually the perfect crop to push. You can choose your nitrogen dose and they won’t lodge, and spray whenever you want. You manage the crop how you want to.”