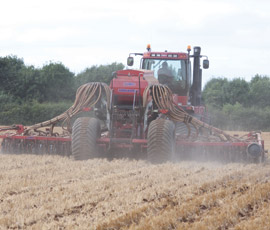 September-sown oilseed rape can still be a winner, according to experts, and good rooting is key to good yields.

Memories of last year’s drilling difficulties will have seen many growers drilling as early as possible, but Procam suggests sowings in the last week of September will only incurr an average yield penalty of 0.2t/ha, compared with those drilled into the latter half of August, making it still the most attractive break crop.

Contractor Chris Middleditch of R&R Farms, Wrentham, Suffolk, who is set to sow some of his oilseed rape in September, says hybrid varieties play an important role. In recent years, their stronger autumn establishment and extra vigour in the spring have paid off, according to Mr Middleditch.

“The star this year has been the variety Compass, which achieved the highest yield at just over 5.0 t/ha,” he says. Mr Middleditch will look to double his Compass acreage, using a 4m Sumo Trio drill.

“We’ve found the Sumo’s long subsoiler legs condition our soils better as they go very deep to break up any consolidation to help the roots to establish well. And if we do drill later and it rains, the water drains more effectively.”

Mike Mann from plant breeder DSV says the ideal variety for later sowing are ones that grow vigorously for the first 30 days, before dropping down significantly for the winter. Hybrids such as Compass perform particularly well and Mr Mann also suggests Troy as a perfect late-drilled variety.

Achieving a strong profile early on is particularly important in September drilling, as poor root development will reduce yields and plants that don’t establish quickly are susceptible to slug and pigeon attacks.

Cultivations for later-drilled crops should focus on helping the tap root to develop and to allow free drainage, says Mr Mann. “Cold, waterlogged and compacted soils are where the potential problems lie with late drilling, so you’ve got to take all precautions to avoid this – soil temperature has more of an influence on seed establishment than air temperature.

“If you’re direct drilling, make sure you use a subsoiler to break up any pans and choose your fields carefully. Straw, trash levels and soil type are critical factors.”

Plant population will also play an important part and seed rates should be geared to achieving 25-35 plants sq/m for overwintering, says Mr Mann.

Nick Myers of agronomy group ProCam says nutrient have a key role in establishing strong rooting. “We advise using a specific starter fertiliser for later-drilled crops which, as well as containing valuable nitrogen, also has zinc and phosphate. Phosphate is the real engine of growth early on.

“Nutrients should be applied with the drill and placed just below the seed, so as soon as the root emerges, it can pick up the nutrients encouraging a healthy root system and strong growth.”

Mr Myers says if a starter fertiliser is not feasible, a general foliar-applied multinutrient mix within the first four to five days may help yield.

When two to six leaves have formed, stabilised phosphite can be applied to stimulate root hair production for more effective nutrient scavenging.


Get soils into good shape now for next season