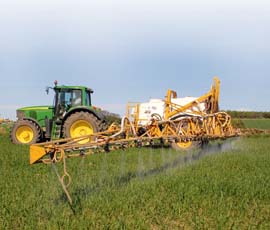 Septoria and rusts are key disease threats to address as wheat approaches the T1 fungicide timing, according to our Crop Watch agronomists.

In Kent, most wheat crops received a triazole and chorothalonil spray at T0, which provided a good base for looming T1 applications, said Masstock agronomist Colin Sharp.

“Leaf three is emerging with growing confidence and Septoria tritici is our main focus, with Helix (prothioconazole + spiroxamine) our first choice to help combat the rust and mildew threat.”

Second wheats would be treated with a higher rate to counter eyespot and help fusarium control, said Mr Sharp. “T1 sprays will be used to reinforce earlier wheat plant growth regulator treatments and tidy up late-emerging cleavers, too.”

Moddus (trinexapac-ethyl) and chlormequat would be applied, as well as key trace elements, copper and manganese for crop health and productivity, he added.

Excalibur and Castille oilseed rape were starting to flower, with most other varieties not far behind, he said. “For sclerotinia control, all crops will receive a boscalid-based spray at mid-flowering.”

A second spray would be considered if flowering extended for a further two to three weeks, he added. “This could also be a good time to add foliar urea, which can help boost yields, particularly if the dry weather continues.”

In the west, T1 sprays would be applied to wheat crops once leaf three was 75% emerged, said Countrywide Farmers agronomist, Neil Donkin from Gloucestershire.

“Septoria and rusts are the main disease threats. I have so far only found yellow rust in Claire, on the tips of the leaves.”

Spring beans had got off to a good start, but were being attacked by pea and bean weevil, he said. “Check for the characteristic notching around the leaf margins and spray if found.”

Spring oilseed rape and linseed were beginning to emerge and needed frequent monitoring for flea beetle, even where they have had a preventative seed dressing applied, he said.

Cambridgeshire agronomist, Will Foss from UAP, said strobilurins were likely to feature in his T1 recommendations. These would be particularly important on rust-infected wheat crops, second wheats and milling varieties, he said.

Most sugar beet crops were at the cotyledon stage and post-emergence herbicide programs were underway, with desmedipham the product of choice, given the dry conditions.

“Disease levels have been low, with traces of rhynchosporium, net blotch and mildew, so a robust triazole/strobilurin will probably suffice,” he said.”Prices quoted for the newer SDHI fungicides do not encourage more than a tentative look.”

Oilseed rape crops in the area needed to be treated with a protective spray application for light leaf spot, using a prothioconazole-based product, he explained.

Cool winds and low overnight temperatures meant pollen beetles were opting to remain in hibernation. “Only consider spraying with a pyrethroid-insecticide if threshold levels are reached.”

Even the most forward wheat crops were only just approaching the T0 timing, said Mr Coutts. “If yellow rust isn’t present, then a robust rate of tebuconazole and a multi-site inhibitor (chlorothalonil or mancozeb) should cope with the low levels of septoria.”