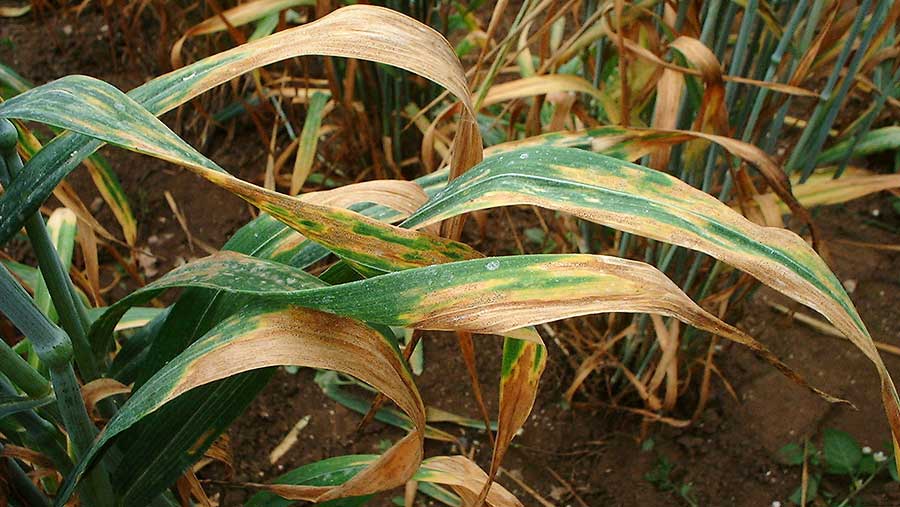 A long-established link between high yields and low resistance to septoria in wheat may soon be broken following a discovery by scientists, leading to high-yielding varieties with good resistance.

Researchers at the John Innes Centre in Norwich have discovered why plant breeders have found it difficult to produce wheat varieties that combine high yield and good resistance to septoria.

They trace the problem back to breeding decisions made nearly 60 years ago.

The fungal disease first emerged as a threat in the 1970s and, in severe cases, can cause yield losses of up to 50%.

However, it has recently become an increasing problem for growers due to rising resistance among common fungicides.

The research team, led by James Brown, has been conducting a study of the genetic code of wheat to find out which genes have an impact on each crop trait, with the results published last week in Molecular Plant Pathology.

They found that the gene with the biggest effect on increasing susceptibility to septoria is closely linked to one that increases yield and grain size.

“We studied a historical set of variables covering more than a century of wheat breeding and traced back [the link] to a variety called Heines Peko, which was used to breed for yield and rust resistance in the late 1950s,” said Prof Brown.

Heines Peko was then crossed with Cappelle Desprez, and became such an influential variety that all modern wheats bred in Britain today are descended from it.

“As wheat breeders selected ever more strongly for higher yield, susceptibility to septoria hitch-hiked along with it,” he explained.

“My group is now trying to find out if the connection between the two traits can be broken.”

Resistance to septoria has made modest gains among varieties in the AHDB Recommended List over the past 10 years, but the fact that breeders were not aware of the link between yield and resistance will have slowed progress, as much of their work is on increasing yields.

Prof Brown is confident in the future breeders will be able to accelerate breeding for resistance while minimising undesirable side-effects such as yield reductions.

The research was supported by Defra through the Sustainable Arable Link programme, with support from AHDB and a consortium of plant breeding companies: Elsoms Seeds, Limagrain, Sejet, SW Seed and Syngenta, and by the Biotechnology and Biological Sciences Research Council (BBSRC).