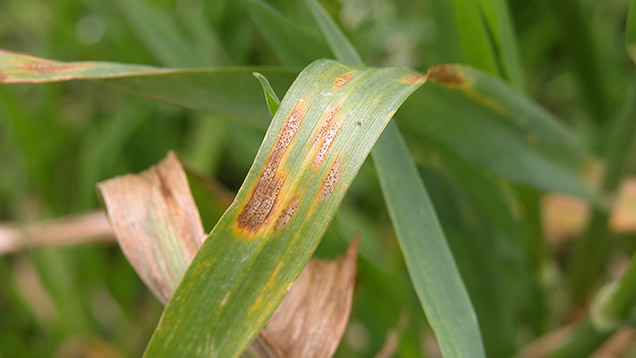 Rising fungicide resistance in Ireland is prompting one expert to advise wheat growers to avoid popular azoles for their first spray in spring.

Septoria is becoming serious enough for official advice to also use only azoles in mixtures with other azoles or an SDHI and not on their own.

Steven Kildea, plant pathologist at state-funded Irish advisory group Teagasc, says there has been a sharp decline in efficacy of all azoles against septoria in recent years.

With such high disease pressure in the wet Irish climate for the wet-loving septoria, azoles are no longer advised for March T0 sprays.

See also: How the drilling window can make or break Irish wheat yields

“There is no benefit of using an azole at T0 when targeting septoria as there will be selection for resistance,” he tells Farmers Weekly.

He suggests just using a protective multisite fungicide such as chlorothalonil for septoria, and adding in a strobilurin if needed for rust control.

Mr Kildea says there is still reasonable disease control by mixing azoles, although this has been reduced after a heavy septoria season in 2010-11.

Septoria is largely spread by wet weather in April, May and early June with rain splashing innoculum from lower leaves on to the key higher ones.

The sole bright spot for growers is that there has been no shift in sensitivity to septoria among the new generation of SDHI fungicides.

This means that his recommendation for T1 and T2 sprays are for an SDHI-plus-azole approach plus a multisite, while a T3 head spray should be an azole mix with plus or minus a multisite.

He stresses the need to use mixtures of fungicides to boost effective disease control and protect against fungicide resistance build-up.

“We do get a step up in yield when adding an azole to the SDHI,” he says.

Note – Irish regulations do not have an upper limit on the number of chlorothalonil sprays used in a growing season, but do limit the total amount of active ingredient of the fungicide used in a season.

The struggle to control septoria has led to growers in the wetter arable areas around Cork giving up winter wheat and some moving to winter barley.

This season the Irish area to winter barley, at about 80,000ha, has moved above winter wheat for the first time as yields from new barley varieties have risen and the crop can be grown with lower costs than wheat.

However, in barley, Mr Kildea has seen another wet weather disease – rhynchosporium – showing resistance to strobulurins on one site in 2013 and on three difference sites in 2014.

This is not a major factor, he points out, as strobilurins are not widely used for rhynchosporium control.

But it is another incidence of declining efficacy of fungicides.

UK fungicide experts says septoria populations are slightly different in Ireland compared with the UK so these recommendations do not directly apply over here.

However, they say azole use at T0 is usually aimed at rust, so where rust is not a problem it makes sense to just use clorothalonil at T0 for septoria control.

Experts add there may be small effects from mixing azoles, but the larger differences come from mixing an azole with an SDHI rather than simply using two azoles together.