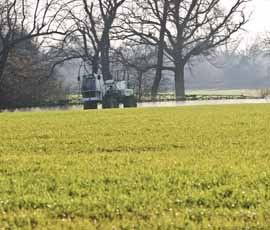 Mild weather has stimulated blackgrass growth, creating a spray window for growers, agronomists say. But forecast cold weather might shut it by the weekend.

Soil temperatures in excess of 10C have been reported in the eastern counties.

This has stimulated blackgrass growth and with ground conditions allowing travel, a spray window has opened, says Stuart Jackson of Dow AgroSciences.

“Treating in these mild spells during January and February against smaller weeds will result in significantly higher levels of control compared with applications in March and April on bigger weeds,” he says.

“But with cold weather forecast within the next few days, these will be halted. We have been pleasantly surprised by results from our autumn programmes, so there is no need to panic, though we still have our problem areas,” says Mr Vickers.

The imminent cold snap has put off Will Foss of UAP in Cambridgeshire, who prefers to wait and see when temperatures may rise again.

“I have seen continued blackgrass growth, but have held treatment. When the temperatures rise again we will be spraying Atlantis.”

But he won’t be adding Liberator (flufanacet + diflufenican), even though it has been approved for use up until 31 March. Previously it could only be used up until 31 December.

“I don’t think further residual action is required. I will hit the already emerged blackgrass by adding a contact to the Atlantis.”

Tod Hunnisett, an independent agronomist covering Sussex and Hampshire, believes the Liberator would have little effect on any blackgrass more advanced than one-leaf stage.

“On a very late-sown crop where blackgrass is just emerging it could be considered. Otherwise a contact should be used,” he says.

In contrast Mr Vickers, who achieved good results with Liberator during the autumn, will be considering using it again in partnership with Atlantis into the spring.