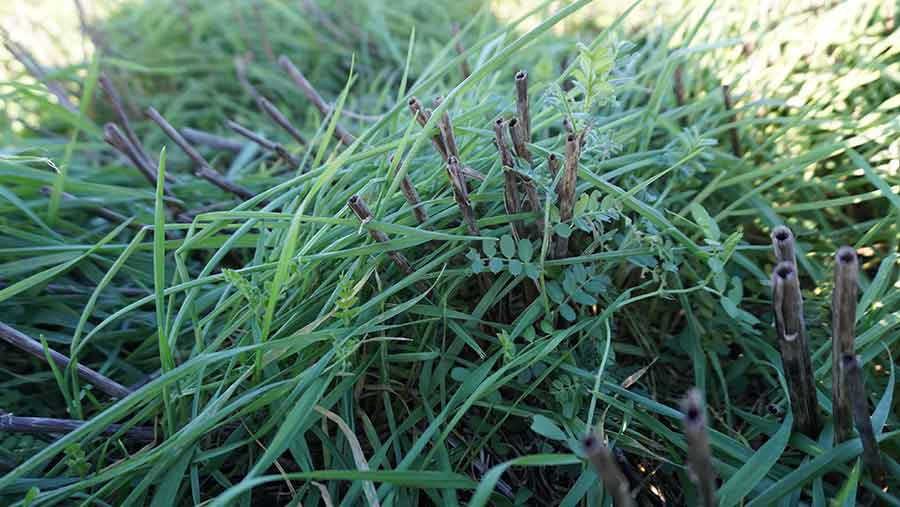 Vetch, grown as a cover crop

The short-term benefits of improved nutrient capture and weed suppression pay for the cost of establishing a cover crop, according to new data.

This then leaves the longer-term benefits to soil health and any yield increases in the following crop as a free bonus.

But many farmers are still missing out on these benefits, believes Limagrain seed sales specialist John Spence.

He explains that the key driver for the uptake of cover cropping is to meet Basic Payment Scheme greening rules, specifically the ecological focus areas (EFAs).

“This has resulted in many requests for the cheapest mix that was EFA compliant,” he recalls.

“However, a poor cover crop brings little additional benefit above simply fallowing the ground, while still incurring the cost of establishment.”

With a little more thought and tailoring mixes to do a specific job, farmers can reap the benefits, rather than just ticking the EFA box, he says.

Growers need to put 5% of their area into EFAs and the required points can be achieved through a combination of hedging, fallow, buffer strips, nitrogen crops plus catch/cover crops.

To comply with EFA rules, the mix must include a cereal and a non-cereal and must only include species on the list. These are rye, vetch, phacelia, barley, oats, lucerne, mustard and oilseed radish, the latter was added for this year.  Grass can be used if undersown in previous crop.

To quantify the financial benefits, as well as compare different mixes, Limagrain carried out a trial across two Lincolnshire sites this winter, one near Market Deeping and the other further north near Brigg, on lighter land.

Six different mixes were direct drilled into stubbles in 0.4ha plots, ranging from single oil radish or mustard crops through to more complex mixtures. Samples taken at 8, 14 and 24 weeks.

“Results showed that cover crops were typically producing more than 2.0t/ha of biomass with a similar performance between mixes,” he says.

Using current prices of ammonium nitrate (£210/t), triple superphosphate (£275/t) and muriate of potash (£240/t), the overall crop value comes to about £152/ha, which includes £10/ha of nitrogen fixed by the vetch and a grazing value.

On the cost side, the seed, cost of direct drilling, harrowing, spraying and glyphosate adds up to £90-£145.

Looking at the soil improver mixture on trial, the nutrient retention benefit was slightly lower at £110/ha, but when the reduced cultivations at taken into account, the value is pushed up to £156/ha.

This was a conservative estimate using the cheapest activity (discs). Similarly, for the weed control mix, the reduced need for herbicide brings the benefits to about £148/ha.

“Typical herbicide programmes range from £50-£100/ha and if you can cut populations, you may be able to go with the cheaper approach.”

However, there are also longer-term benefits which are difficult to measure. These include increased soil organic matter, better soil structure, improved water infiltration, reduces soil erosion and increased numbers of beneficial fauna.

The main conclusion is that growers can benefit from these long-term benefits while having the reassurance that the short-term benefits will largely cover the cost of establishing them.

Maximising these benefits comes down to achieving good establishment and selecting the right mixture.

Limagrain’s John Spence explains that species selection is dependent on meeting the EFA requirements plus the reason for growing it, rotation and machinery available. For example, does your drill allow you to drill into a green crop?

“If you are on lighter land where leaching can be a problem, opt for a mix of rye and vetch. Rye has a good ability to take up nitrogen and when combined with vetch which fixes nitrogen, the mix offers maximum nutrient capture,” he says.

Where there is a weed problem, he recommends a cover or catch crop mixture of black oats and vetch. “Black oats have good vigour to smother and also produces avenocins from roots which inhibit blackgrass germination.”

Finally, where soil improvement is the aim a mix like oats, oilseed radish phacelia and mustard will give different rooting depths to relieve compaction.

“It’s a balance – select mixtures that have been specifically developed for the job you want them to do and get the benefits over and above the box-ticking role. But watch making it overcomplicated.

“Adding in unnecessary species can really push up the price without additional benefits. Some species such as clovers can be difficult to kill prior to the next crop and may hinder drilling.

Another is unintended pest and disease carryover. “For example, where oilseed rape is in the rotation, avoiding using mixes containing oilseed and tillage radish, as it may increase clubroot risk.