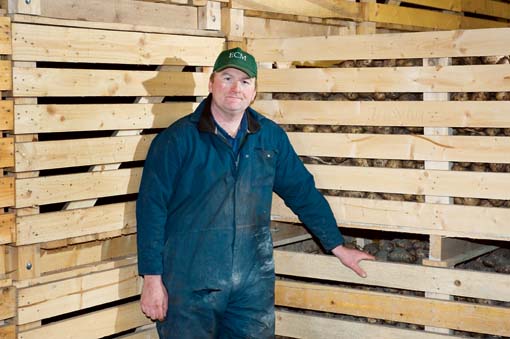 We completed potato planting on 9 May, which is exactly the same date as last year. We would have been finished sooner, but we were bagging and loading the last of our crop from last year. It is quite frustrating when you are in the barn grading potatoes when the sun is shining and you have seed waiting to plant.

Ground conditions were pretty much perfect, but in the last few fields we had to be careful that we didn’t get too far ahead with the plough as we needed to conserve moisture. Overall we couldn’t have wished for an easier time and it has given the crop a good start.

By the time we had finished planting, the earlies were well up and it was a bit worrying when a couple of nights of frost were forecast. Luckily they weren’t that cold and there was no damage, although I have heard reports of damage in other areas.

We were thinking it was getting a bit dry as well which is unusual for us as we usually get plenty of rain, but the weather changed and we have had showery weather since. Although we haven’t had a great amount of rain it has really helped to green up the cereals which had begun to look a bit stressed.

Our SPS forms have been filled in and sent off and we now wait and hope that everything is ok. Up to now, we haven’t had any problems, but you always worry that something will go wrong.

As well as being a pretty successful month at work I am pretty pleased with my other interests – with the under 10’s football team that I coach winning their division and Manchester United winning the Premiership. As a season ticket holder, hopefully my trip to Wembley for the Champions League final will be just as rewarding.

Read more from Martin and our other Arable Farmer Focus writers.